At Churchill Downs they post the name of every Kentucky Derby winner on the white walls of the place, literally encircling the paddock area in 132 years of rich racing history.

From Aristides in 1875 to Citation in 1948 to Secretariat in 1973, you read the names and channel the majesty.

But for as long as the place stands, everyone who experienced the bittersweet racing summer of 2006 will look at the sign saying "Barbaro" and feel a spasm of sadness. No Derby story ever took such a sharp turn toward tragedy.

Two minutes of glory, followed by two weeks of adulation.

An instant of horror, followed by weeks of worry.

Then weeks of cautious, growing optimism.

Now a final moment of sorrow.

That was Barbaro's vivid streak across our consciousness. From a stirring sprint down the stretch in Louisville on the first Saturday in May to a horrible afternoon two weeks later in Baltimore to a somber announcement from a Pennsylvania animal hospital in January, he left his mark on us.

Given the fragility of the breed and the amount of stress inflicted upon these animals at the young age of 3, we're probably lucky these catastrophic breakdowns don't happen more often. And in the case of Barbaro, we're absolutely lucky there was ever any hope of survival at all.

From the moment the colt's shattered right hind leg torqued out at a gruesome angle just 200 yards into the Preakness last May 20, it took a heroic effort from everyone involved to give Barbaro a chance to live as long as he did.

Jockey Edgar Prado brought the surging and scared colt to a rapid halt, giving the track vets a chance to treat him on the Pimlico front stretch. Emergency personnel quickly vanned Barbaro from Baltimore to the New Bolton Center in Kennett Square, Pa. Once there, Dr. Dean Richardson performed a surgery described as both intricate and exquisite to stabilize the colt's fractured leg.

Richardson warned everyone it would take months to heal the horse, with many pitfalls along the way. Despite the efforts of the doctor and his staff, and the unwavering dedication of owners Roy and Gretchen Jackson, Richardson's prediction proved depressingly accurate.

Laminitis, a debilitating and often fatal hoof disease, set in on Barbaro's left hind leg during early July. But even after surgery to remove most of the hoof, the colt showed remarkable progress -- to the point that in December, Barbaro's release to the rolling bluegrass hills of a Kentucky horse farm seemed imminent.

It never happened. Laminitis intensified, and an abcess developed in the hoof of the damaged right hind leg. The combination became too much to overcome. Monday, 254 days after the injury and 268 days after he became a racing hero, Barbaro was put down. 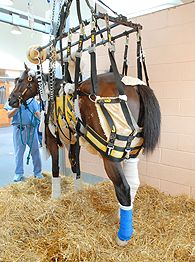 Hard-luck horse racing did it to us again, capturing our imagination and then breaking our hearts. For every Seabiscuit, it seems there are two or three Barbaros.

It's a sport rife with romanticism, brimming with inspirational stories fit for accompaniment by soaring cinematic symphony scores. But the romance is shattered easily, as brittle as the bones in a 1,200-pound horse's skinny legs.

What needs to be unbroken is this: an industry-wide resolve to examine horse racing and make it a safer sport. That could be the positive to come out of this tragedy, and the lasting Barbaro legacy.

The colt's death probably can't be blamed on the usual racing suspects. Nobody believes the horse was physically unsound. Nobody believes the Pimlico Race Course surface was unsafe on Preakness Saturday. Nobody believes this had anything to do with an American obsession on breeding for speed, or pushing a young horse too hard, or Triple Crown races bunched too closely together.

It was, most likely, either one horribly bad step or -- if you believe, as some do, that Brother Derek accidentally kicked Barbaro shortly after the start -- one horribly bad bit of timing.

But obsessing over that individual injury misses the bigger picture, which shows that horse racing routinely devours its stars.

At Arlington Park in Chicago, the '06 summer race meet was devastated by the catastrophic breakdowns of 17 horses in racing and three during morning training hours. In California there were more than 240 fatalities at horse tracks between 2003 and 2005.

Those kind of statistics cannot be tolerated in a sport that is at risk of losing even more of its already splintered audience. Neither can the death of the star of 2006, just one race after America got to know him. It's time to question everything.

Here are the issues horse racing must now confront and discuss, in the wake of its worst fatal breakdown since Ruffian in 1975:

• Safer racing surfaces. Turfway Park in northern Kentucky has gone to Polytrack, a synthetic surface, with encouraging results in terms of reduced injuries. Tradition-steeped Keeneland in Lexington is switching to Polytrack in time for its October meet. Tracks in California have been mandated to adapt to Polytrack as well.

Polytrack will not eradicate catastrophic injury, and its long-term viability is not yet clear. But tracks everywhere should monitor closely how the surface performs over the next 12 months and be prepared to change, if there is compelling evidence that it is safer than dirt.

• A change in medication controls. In recent decades thoroughbreds have become walking pharmaceutical labs, routinely running on blood-thinning medication and anti-inflammatories. There is concern that some of these drugs are used to keep horses going through infirmities and injuries -- and those are the legal drugs. (Every track backside buzzes with whispers about which trainers are a step ahead of the drug-testing posse.)

At the very least, it would help to have more uniform rules on what's allowed from state to state, and how to test for the latest contraband.

• A change in age. This is about as likely to fly as an anvil, but some thoroughbred advocates would like to see 2-year-old racing banned completely and the Triple Crown pushed back from a 3-year-old contest to 4-year-olds.

That affront to 130-plus years of tradition is based on the very reasonable belief that today's race horses are far more delicate than they were generations ago. Very few of the top 2-year-olds are still at their prime at age 3, and even today's lightly raced horses are difficult to keep sound through a Triple Crown campaign.

In fact, just getting horses to the Kentucky Derby has become a battle of attrition. Take a snapshot of the Derby starting gate the minute it opens and record it for posterity. Many of the horses in the field will never been heard from again after that race. A large number of them are cooked each year in the rigorous campaign up to the run for the roses.

Why not, the argument goes, wait until the horses are mature enough to handle the grind?

• A change in calendar, adding more time between the Kentucky Derby, Preakness and Belmont. Instead of packing all three long and grueling races into five weeks, space them out between the first weekends of May, June and July.

This also is an affront to ancient tradition, but it would seem a more likely and palatable alternative than making the Triple Crown a 4-year-old competition. It might sustain interest in racing over a longer period, and it would definitely increase the likelihood of having more horses race in all three legs of the Crown. This year, for the second time this century, no horse ran in all three races.

Some people also would like to see a change in the classic distances, shortening all three races -- or, if the idea of running the Kentucky Derby at 1 1/8 miles is too heretical, shortening two of the three.

Change is not something thoroughbred racing does well, but doing nothing should not be an option. Doing something to make the sport safer would burnish Barbaro's legacy, and might lessen the sadness we'll feel when we see his name on the Churchill Downs wall.