There will be a great deal said and written over the next few weeks about Eight Belles and whether or not her death in last year's Kentucky Derby served as a call to action for a Thoroughbred industry that traditionally has been reticent to change.

One year ago, anabolic steroids were permitted in most racing jurisdictions, including Kentucky. Many veterinarians, then and now, consider steroids a therapeutic medication. Dr. Larry Bramlage, a highly respected equine surgeon who is former president of the American Association of Equine Practitioners and was honored in 1994 with the Jockey Club Gold Medal for distinguished service, said during last year's Triple Crown that there were "some good aspects" to steroids. "Unfortunately," he told a reporter, "we will see the ban on steroids within the year." 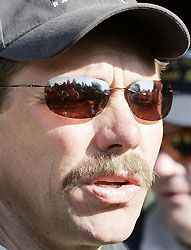 More than a few trainers had anabolic steroids administered routinely to their horses. Some, like Rick Dutrow, trainer of Kentucky Derby winner Big Brown, couldn't explain what the drug did but liked the results. For good reason: Big Brown was unbeaten while racing with the benefit of steroids. He suffered his biggest defeat in the Belmont Stakes after Dutrow stopped the monthly regimen of steroids shots.

Bramlage, incidentally, was right. Steroids were banned in most racing states by the end of 2008, thanks to recommendations of several industry organizations, including the adoption of a new policy by the Thoroughbred Owners and Breeders Association that would make stakes races ineligible for a Grade 1, 2 or 3 ranking if they were run in jurisdictions that permitted steroids.

Strangely enough, Eight Belles was not one of those horses that ran on steroids. When a necropsy was performed on her in Kentucky, the results backed up what her trainer, Larry Jones: had been saying all along: that she had not been administered anabolic steroids. The autopsy also failed to discover any pre-existing condition or bone abnormalities. Furthermore, no illegal drugs were detected in her bloodstream. By all accounts, her injury was a freak occurrence that could not have been predicted or prevented.

So why did the industry react so swiftly, banning steroids, along with toe grabs on the front shoes of horses, and form a Safety and Integrity Alliance through the National Thoroughbred Racing Association?

For starters, there was a strong sense that if the industry didn't take action of some sort, the federal government would. That threat was clearly stated in a Congressional hearing in June that looked into medication issues and the industry's inability to set national policies because of the patchwork of state agencies that regulate the sport.

Others believe the racing industry was overdue for a coordinated national effort to upgrade and nationalize safety and integrity standards for equine and human participants. That's the purpose behind the newly created NTRA Safety and Integrity Alliance, which drafted a code of standards, will conduct comprehensive reviews of racetracks and certify those which meet the code of standards. A three-person team, headed by Safety and Integrity Alliance executive director Mike Ziegler, recently conducted their first comprehensive review of a racetrack, Churchill Downs, host of the Kentucky Derby. Former Wisconsin Gov. Tommy Thompson, who also served as secretary of Health and Human Services for the Bush administration, observed the inspections as the NTRA's independent monitor. Churchill Downs was fully certified following the review.

But even as the first racetrack review was being conducted by the Safety and Integrity Alliance, several incidents took place that will be the focus of a great deal of media coverage leading up to the Kentucky Derby. The first was the discovery of a farm full of undernourished horses owned by prominent New York owner Ernie Paragallo, who was charged with 22 criminal counts of animal cruelty. Paragallo had continued to operate Paraneck Stable despite having his owner's license revoked by the New York State Racing and Wagering Board for financial irresponsibility in 2005. He merely turned the stable's ownership over to his daughters and was licensed as authorized agent of Paraneck. Following the disclosure of the condition of the horses at Paraneck's Center Brook Farm, he was told by the State Racing and Wagering Board and the New York Racing Association that he could no longer participate in racing until further notice.

The second incident involved Jeff Mullins, trainer of probable Kentucky Derby favorite I Want Revenge. Mullins, who has numerous medication violations on his record, was allegedly caught treating a horse in Aqueduct's detention barn prior to a stakes race on April 4, against NYRA rules. The trainer claimed ignorance of New York's race-day medication rules, which are similar yet different from those in California, where Mullins is based.

A third incident occurred this weekend at Oaklawn Park when Old Fashioned came out of his gutty runner-up performance in the Arkansas Derby with a knee fracture that could end his racing career. The colt, who had been a leading Kentucky Derby contender, is a son of Unbridled's Song (sire also of Eight Belles), and he is owned and trained by the same team that brought Eight Belles to the Derby in 2008: Rick Porter's Fox Hill Farm and trainer Larry Jones.

So, yes, the death of Eight Belles may have been a call to action for the Thoroughbred industry. Much has changed, and there has been undeniable progress in the last 12 months for a generally slow-moving industry. But all of the problems in racing  from neglect of retired horses, to medication rules violations, to racing injuries  are not going to be fixed overnight.

Ray Paulick is a Lexington, Ky.-based journalist who publishes the Paulick Report. (www.PaulickReport.com). Paulick served as editor-in-chief of The Blood-Horse magazine from 1992 to 2007, and in the past 25 years has covered Thoroughbred racing, breeding and sales on six continents and in more than a dozen countries. He has appeared on numerous television and radio news programs offering his expertise on the industry. Contact Ray at ray@paulickreport.com.