Funny Cide is the current hero of Castration Nation, the fellowship of thoroughbreds that have suffered the unkindest cut of all. But even if he bags the Triple Crown Saturday at Belmont Park, he'll still need to kiss the ring of the godfather of all living geldings.

Say hello to ancient and ornery John Henry, 28 years old and comporting himself in his dotage like an equine Ty Cobb -- minus the handguns and liquor, but with all of the piss and vinegar.

"John Henry is the original grumpy old man," said Lisa Jackson, director of marketing and public relations at Kentucky Horse Park in Lexington, Ky., where John Henry is spending his golden years as one of the feature tourist attractions.

In human years, John Henry figures to be in his 90s. Still, he's hardly lost the ferocity that made him one of the great race horses ever. The modestly bred bay was gelded early in his career for the most common reason thoroughbreds are emasculated: to improve his disposition.

It clearly never took. John Henry is one mean dude -- no ifs, ands or nuts.

He was famous in his racing days for ripping off steel feed buckets bolted to the wall of his stall with his teeth, then trampling them flat with his hooves and throwing them out of his stall with his feet. Not much has changed. This is the guy in the nursing home looking to whack the help across the shins with his cane.

"He bites, he kicks, he rears, he strikes, he steps on your toes," said Tammy Siters, assistant barn manager in the park's Hall of Champions and one of the two women in charge of John Henry's daily care. "He's been that way since the day he was born, but you can't help but love him. Never a dull moment, put it that way." 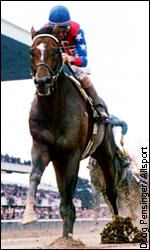 Siters and colleague Cathy Roby treat John Henry, Cigar and the other famous retirees in their care like their own children. "But even they don't turn their back on John Henry," Jackson said. That's an invitation for the old warhorse to take a chunk out of them. With his own teeth. No dentures for this coot.

Then again, if you were an old gelding you might be crabby, too. Your retirement is lacking a certain sex appeal.

Most thoroughbreds go to stud when they stop racing. And if the idea of retiring to a golf resort in Arizona or a waterfront villa in Florida sounds cushy, it's nothing compared to a stallion's post-racing life.

The breeding rights to last year's 3-year-old star and Triple Crown aspirant, War Emblem, were sold for a staggering $18 million. For that, War Emblem got to live the cushy life on a lush, pastoral farm and visit the mares in the breeding shed several times a day.

(He's since shown a, um, decided lack of interest in his second profession. Lack of ardor in the breeding shed is not good, and it lead to a $13.3 million insurance settlement earlier this week to cover War Emblem's lack of productivity. They might try some of the products profusely available via spam e-mail.)

But a retired gelding is of no use in the breeding shed, which can be both good news and bad news.

The good news is that geldings tend to stay on the racetrack longer -- like John Henry, who won his second Horse of the Year honor at the preposterous age of 9. That longevity made him a legion of fans worldwide, some of whom still send him presents on his birthday each March 5. (This spring John Henry received a dozen roses and a bag of carrots from one fan.)

The bad news is that geldings often are simply discarded when their racing days are over and can live sad lives in their later years. Phantom On Tour, who finished sixth in the 1997 Kentucky Derby and was gelded after found to be sterile when his career ended, was brought back to the race track three years after retirement -- despite having suffered serious leg injuries. Phantom raced in ignoble low-budget races at obscure tracks before being saved from a tragic end by several concerned entities. He now stands at the Kentucky Derby Museum as its official Derby horse, making appearances for tour groups and otherwise living the good life in the shadow of Churchill Downs' Twin Spires. (Imagine a golfer moving into a villa off Amen Corner and you'd have a comparably priveleged retirement address.)

John Henry had no such retirement travails. Once he left the track, he went to Kentucky Horse Park, not far from his birthplace in Paris, Ky. There John Henry works nine minutes a day, making three three-minute appearances for tour groups that see video images of the horse in action and hear the roll call of his voluminous accomplishments: seven-time Eclipse Award winner, winner of more graded stakes than any other horse (25), retired in '84 as the richest thoroughbred ever at that time ($6.6 million in purses).

There's also a measurement at the horse park of John Henry's famous stride, measured as the third-longest in history at 26½ feet. That trails only Native Dancer (29 feet) and Man O'War (28 feet) -- both significantly larger animals than the fairly runty John Henry, who stands just over 15 hands tall.

Other than the shows, John Henry lives an enjoyable life in his own one-acre paddock, sometimes racing down the fence row with his neighbor, Cigar. Even at age 28, running is in his blood and bones.

Turns out that hard-edged John Henry's best friends are barn swallows, which nest in his stall every year. One day at the horse park they found "John," as they call him, standing guard over a baby bird that fell out of the nest.

The godfather of geldings might be missing some important equipment, but he does have a heart after all.

Pat Forde is a columnist with the Louisville Courier-Journal and is a regular contributor to ESPN.com