Bobby Frankel, who rose from the streets of Brooklyn to become one of the most successful and respected trainers in the history of thoroughbred racing, died early Monday at his home in Pacific Palisades, Calif., from complications due to lymphoma. He was 68. 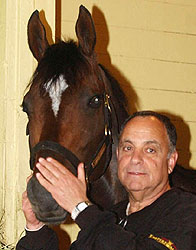 Frankel had not been seen publicly in more than six months, since a recurrence of lymphoma, which he beat back about a decade ago, reappeared. In recent months, he only had contact with a handful of people, and he had dispersed a number of his horses. He had spent time shuttling between his home and Cedars-Sinai Hospital in Los Angeles, where he was receiving treatment. According to a close friend, he left the hospital Saturday after expressing a desire to spend his final hours at home.

For more than 40 years, Frankel was one of the top trainers in the sport. He began with claiming horses in New York, moved to California and continued to win at an eye-catching rate, then gradually transformed his barn into one that emphasized quality over quantity. He won at least one Grade 1 race every year from 1988 through this year. In 1995, he was inducted into racing's Hall of Fame.

With the exception of the Kentucky Derby, Frankel won just about every major event in racing. He won the Belmont Stakes with Empire Maker, twice won the Kentucky Oaks, and had six Breeders' Cup wins, most recently in last year's BC Filly and Mare Sprint with Ventura. His last major victory came with Champs Elysees in the Canadian International on Oct. 17. In recent months, Humberto Ascanio oversaw Frankel's horses in California, while Jose Cuevas and Ruben Loza took care of Frankel's New York-based runners, though Frankel was in touch with those men every day via telephone.

He was on top for so long that Julio Canani, another California-based trainer, nicknamed Frankel "Presidente" in admiration. 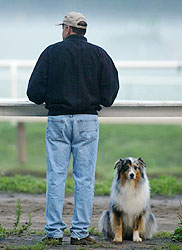 Several horses Frankel trained made their mark in the breeding shed, too, most notably the mare Toussaud, who produced Chester House, Empire Maker, and Honest Lady for Juddmonte Farms. He also trained Medaglia d'Oro, now better known as the sire of Rachel Alexandra.

"Life's funny," Frankel said in 2000. "Sometimes things just happen, and they change your life completely. I wasn't born into this. I just followed my instincts and ended up where I am."

Frankel was known as a bit of a grouch, one who complained long and loud when he saw something wrong. He could be playful and witty one moment, a pit bull the next. But his outspokenness was born of a sincere passion for the game, and his gruff exterior masked a man who would get choked up when misfortune befell one of his horses or his dogs. In 2007, Frankel missed the Breeders' Cup at Monmouth Park because his Australian shepherd dog Happy was near death. He would get emotional talking about the horses to whom he grew close, such as Exbourne or the filly Sightseek. He once complained about fans of the Detroit Red Wings throwing octopuses onto the ice.

"I mean, they're living things," he said.

His employees were uncommonly loyal to him. Both Ascanio and Loza, for instance, worked for Frankel for more than 30 years.

Frankel was keenly interested in politics; the television in his stable office was usually on CNN. He also loved baseball, and grew so close to Joe Torre that when Torre first took over as manager of the Los Angeles Dodgers, he lived in Frankel's Pacific Palisades house while Frankel was in New York.

Robert Frankel was born in July 9, 1941 in New York to Merrill and Gertrude Frankel, who were in the catering business. Frankel first got into racing as a gambler, then found his way to the stable area, figuring a few hours walking hots in the morning was worth it to get a free pass to the afternoon's races.

Enamored of the sport, Frankel began training in 1966, and won his first race that year. His first major win came in the 1970 Suburban with Barometer, whom he had claimed for $15,000.

Two years later, Frankel relocated to California, and in his first season at Hollywood Park, in 1972, he set a single-season record at the spring meeting with 60 winners, mostly claimers. His first major clients were William and Marion Frankel, who were not related to him.

With the backing of Bert and Diana Firestone, Ed Gann, Jerry Moss, and Stavros Niarchos in the 1980s, Frankel gradually turned his barn in one filled with stakes runners. His success with European imports attracted the attention of owner Prince Khalid Abdullah of Saudi Arabia and his advisor, Dr. John Chandler, who boosted Frankel's stock significantly by turning over the United States-based horses of Juddmonte Farms.

Juddmonte has won six Eclipse Awards as champion owner or breeder since being associated with Frankel.

Though headquartered in California since 1972, Frankel for at least the past decade had a string based at Belmont Park and Saratoga from April through October, and he would usually spend half his year in California, half in New York, with brief stops in Kentucky for Keeneland in the spring or at Churchill Downs during Derby Week.

Frankel is survived by his daughter, Bethenny, 38, who is a reality television celebrity on the show "Real Housewives of New York." Frankel was married twice, most recently in 2003 to Bonita Boniface. They divorced less than three years later, but she was with him during his final months. Funeral services are pending.