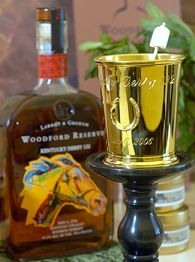 The sweet cocktail will be made with one of the state's finest
bourbons and served in a gold-plated cup with a silver straw to the
first 50 people willing to put down the cash at the May 6 race.

Mint from Morocco, ice from the Arctic Circle and sugar from the South Pacific will put this mint julep in a class of its own, the distillery selling the drink said.

"We thought we would reflect on and complement the
international nature of the Kentucky Derby," said Chris Morris,
master distiller for Woodford Reserve. The distillery, owned by
Louisville-based Brown-Forman Corp., will sell the drink only on
race day to raise money for a charity for retired race horses.

The company already sells about 90,000 mint juleps at the Derby each year but hopes what's being dubbed the "ultimate" mint julep will catch on. Those who buy the $1,000 cocktail will get to watch Morris and others make it.

"People want a memory," said Wayne Rose, Woodford Reserve's brand director. "This is something they can take home and share with friends."

Mint juleps have been synonymous with the Kentucky Derby for decades. They are often served in silver or pewter cups and are meant to be sipped and savored.

The new 24-karat gold cup promotion fits in with the high-class atmosphere, said Gary Regan, a spirit and cocktail expert who's been to the Derby twice.

"I think there will be enough people with enough money at the Kentucky Derby that will go for that sort of thing," said Regan, author of "The Joy of Mixology."

"A concern has developed over time that these horses were
finding their way to be sold for slaughter," track spokeswoman
Julie Koenig said.

Churchill Downs will funnel money from the pricey juleps to the New Jersey-based Thoroughbred Retirement Foundation, a nonprofit
organization that provides homes for the former race horses.

"These horses are there making these memories special to us," Kornig said. "It's nice to find a way to give back to them."