KENNETT SQUARE, Pa. -- Barbaro underwent more than six
hours of surgery Sunday to repair the rear leg bones he broke in
the Preakness, calmly awoke from anesthesia and "practically
jogged back to his stall" for something to eat.

But the Kentucky Derby winner still faces just a 50-50 chance of
survival.

"From the last time I saw him to now was a big relief. They did an excellent job. It's just an amazing thing to see him walk in like that. I feel much more comfortable now. I feel at least he has a chance."
Michael Matz, Barbaro's trainer

Despite the huge first step on the road to recovery, Dr. Dean
Richardson said the Kentucky Derby winner's fate still came down to
"a coin toss."

"Right now he's very happy," Richardson said after the surgery
at the University of Pennsylvania's New Bolton Center for Large
Animals. "He's eating, he's doing very good. But I've been doing
this too long to know that day one is not the end of things."

The strapping 3-year-old colt sustained "life-threatening
injuries" Saturday when he broke bones above and below his right
rear ankle at the start of the Preakness Stakes. His surgery began
around 1 p.m. Sunday, and it wasn't until some eight hours later
that Richardson and trainer Michael Matz emerged to announce that
all had gone well.

"From the last time I saw him to now was a big relief," said a
visibly fatigued Matz. "They did an excellent job. It's just an
amazing thing to see him walk in like that. 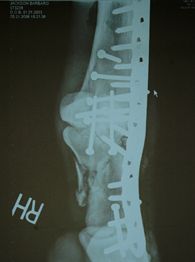 "I feel much more comfortable now. I feel at least he has a
chance."

Unbeaten and a serious contender for the Triple Crown, Barbaro
broke down Saturday only a few hundred yards into the 1 3/16-mile
Preakness in Baltimore. The record crowd of 118,402 watched in
shock as Barbaro veered sideways, his right leg flaring out
grotesquely. Jockey Edgar Prado pulled the powerful colt to a halt,
jumped off and awaited medical assistance.

Barbaro sustained a broken cannon bone above the ankle, a broken
sesamoid bone behind the ankle and a broken long pastern bone below
the ankle. The fetlock joint -- the ankle -- was dislocated.

Richardson said the pastern bone was shattered in "20-plus
pieces."

The bones were put in place to fuse the joint by inserting a
plate and 23 screws to repair damage so severe that most horses
would not be able to survive it.

When he came out of surgery, Barbaro was lifted by sling and
placed on a raft in a pool so he could calmly awake from the
anesthetic.

Richardson said the horse "practically jogged back to his
stall" and was wearing a cast from just below the hock to the
hoof.

"He's a real genuine athlete, there's no doubt about it,"
Richardson said. "Even the way he woke up from anesthesia, he was
very much the athlete waking up from general anesthesia."

Richardson again stressed that Barbaro had many hurdles to
clear.

"Horses with this type of injury are very, very susceptible to
lots of other problems, including infection at the site," he said.

Barbaro will be treated with antibiotics to try to stave off such infections.

Horses are frequently euthanized after serious leg injuries
because circulation problems and deadly disease can arise if they
can't distribute weight evenly -- and lying down for long periods
can cause internal problems, making immobilization or elevation
impossible.

Richardson said he expects Barbaro to remain at the center for
several weeks, but "it wouldn't surprise me if he's here much
longer than that."

Tucked away on a sprawling, lush 650-acre campus in Chester
County, the New Bolton Center is widely considered the top hospital
for horses in the mid-Atlantic region. It is renowned for its
specialized care, especially on animals needing complicated surgery
on bone injuries.

Roses, other assorted flowers and cards from fans and admirers
expressing well wishes were delivered to the center Sunday and
displayed in the lobby. One sign said "Be Well Barbaro." Two
apples and five carrots, some of a horse's favorite snacks, lay
next to the flowers.

The breaks in the colt's leg occurred as a result of an
"athletic injury," said Corinne Sweeney, a veterinarian and the
hospital's executive director.

"It's an injury associated with the rigors of high
performance," she said. "They were designed as athletes and they
are elite athletes, thus they incur injuries associated with
performance. The frame sometimes plays a role, absolutely."

"When we unloaded him, he was placed in intensive care and we
stabilized him overnight," Dallap said. "He was very brave and
well behaved under the situation and was comfortable overnight."

Barbaro's injury came a year after Afleet Alex's brush with
catastrophe at the Preakness. Turning for home, the horse was
bumped by another and nearly knocked to his knees before gathering
himself and going on to win.

Thoroughbreds have broken down in the past in big races: In the
1993 Preakness, Union City broke down and was euthanized; in the
1993 Belmont Stakes, Preakness winner Prairie Bayou broke down; in
the 1999 Belmont Stakes, with Charismatic trying to win the Triple
Crown, he was pulled up while finishing third with a fractured
ankle; Go For Wand broke down in the stretch of the 1990 Breeders'
Cup Distaff and was euthanized; and in 1975, the great Ruffian
broke down in a match race with Foolish Pleasure. She was operated
on, but was later euthanized.