KENNETT SQUARE, Pa. -- Barbaro was on his feet Monday in his 12-by-12 stall, and that's where he'll be for the next few days, the next few weeks and probably the next few months.

With a fiberglass cast on his right hind leg and a staff of veterinarians keeping a 24-hour watch, standing around is the best thing -- the only thing -- the stricken Kentucky Derby winner can do. 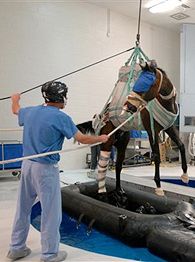 A day after surgeons spent six hours pinning together the leg bones he shattered in the Preakness Stakes on Saturday, the 3-year-old was adjusting to his new life as a rehab patient.

"He got through the night very well, day one and into day two is going as well as expected," said Dr. Corinne Sweeney, executive hospital director at the George D. Widener Hospital for Large Animals at the University of Pennsylvania's New Bolton Center. "He is standing on the leg, and with the appropriate amount of weight on it."

Barbaro also showed interest in a few mares nearby. "He's acting like a young colt should," she said.

Despite the good initial reports, doctors have cautiously given Barbaro a 50-50 chance for survival.

"He's doing all the things a horse should do, including eating and nickering at the mares near him," Dr. Dean Richardson, who performed the six-plus hour surgery with a team of assistants, said on the hospital's Web site. "While we are optimistic, we remain cautious about his prognosis and are watching for signs of infection at the surgical site, laminitis and other possible aftereffects of the surgery."

Laminitis is an often-fatal disease sometimes brought on by uneven weight balance.

The colt, accustomed to strong early morning gallops at the Fair Hill Training Center in Elkton, Md., is far, far removed from that routine. His daily regiment now consists of trying to stand comfortably and keeping his weight evenly distributed.

Barbaro will spend his long recovery in the intensive care unit of this 650-acre center in the heart of Pennsylvania horse country.