The cell phone starts ringing at 4:30 a.m., congratulatory calls for trainer Tim Ice from the people who weren't able to reach him the day before. Ice rolls out of bed (which he fell into at 10 p.m. the night before) and starts answering as he heads to Barn 12A to check on his Belmont winner. Yeah, his winner of the Belmont Stakes.

It hits him again and again this morning, as reporters cruise by the shedrow and racing paparazzi set up their shots and fellow horsemen stop by with handshakes and admiring remarks, but it still hasn't quite sunk in. In his first year of operation, on his 35th birthday, he gets a classic win. A guy couldn't ask for anything more.

"I don't need to talk," he says. "I don't need to say anything about my horse. I just let the horse show on the track what he's made of. He put confidence into me, he showed me in the last two weeks that he was gonna run a good race. He backed up how he was training."

It's the day after the Belmont. A blanket of white carnations rests upon the ledge across from the stall of the "other bird," Summer Bird. It is quiet at Belmont Park. Triple Crown season has come to an end. 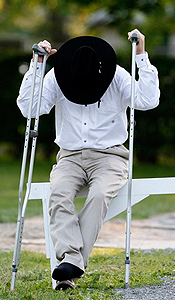 Todd Pletcher's string goes through business as usual, a hectic morning, while runner-up Dunkirk recovered from his front-running effort. A few doors over, outside Barn 11, Chip Woolley reflects upon a whirlwind season while beaten Kentucky Derby winner Mine That Bird grazes in the stable yard.

"It seems like just yesterday that I went to Churchill Downs," said Woolley, whose hard-trying gelding finished third. "It was a great run; you couldn't have dreamed it up and drawn it out on paper. The hardest thing to get through my head in that week after the Derby was that I'm going to get to keep that forever. But I wasn't working no magic. It was just a really good horse that did his job."

This is what our admiration comes down to -- the horses that belly down and give their all. It's what we live for. And the soft, crisp sound of colts cropping up lush emerald grass. The sunlight rippling along their burnished muscles. The camaraderie of an early-morning press conference. The questions levied and answers gleaned. The figures we've come to know and respect. The feeling of calm and quiet that descends upon us through the dappled shadows. All this we'll miss in the bittersweet conclusion to the Triple Crown trail.

We are tired. We are satisfied. We'll keep coming back for more.

Claire Novak is an award-winning journalist whose coverage of the thoroughbred industry appears in a variety of outlets, including The Blood-Horse magazine, the (Albany, N.Y.) Times Union, and NTRA.com. She lives in Lexington, Ky.