LOUISVILLE, Ky. -- Tape a program to the wall. Wear a blindfold. Throw a dart to pick your winner. 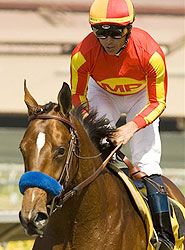 That's as good a selection method as any for the 2011 Kentucky Derby at Churchill Downs, where a field of 20 horses lines up Saturday in what may very well be recent history's murkiest edition of the 1¼-mile event. A motley assortment of runners falls into two categories for the 137th Derby that goes off at 6:24 p.m. ET -- questionable and more questionable -- and standouts at various levels seem one-dimensional at best.

Contenders with ability to get the distance have never proved it on a dirt surface. Horses that relish the dirt may not have the stamina to run more than a mile. The few that put the two together have other questions to answer -- recent races gone awry or low speed figures compromising their past performances -- and several late defections in the past few days resulted in even less clarity. Last night at the post position draw, eight entrants were given morning-line odds of 30-1 by handicapper Mike Battaglia while three were placed at odds of 20-1.

"You would want to think that the most important race in North America is the race with the richest history that has a lot of tradition to it," said owner Ahmed Zayat, who sends out maiden winner Nehro (runner-up in the Louisiana Derby and Arkansas Derby) in pursuit of victory from Post 19. "Nevertheless, it's become a very, very different race in the last 10 years. I'm not sure if that's a reflection of the quality of horses we have now, or of the way they're made or the way they're trained, but it looks like every textbook rule for getting a horse to the Derby is out. You want to think of the unbelievable tradition and history of this race, how it's the hardest one to win, and you want all the nice glory and historical significance to continue to go along with it. But sometimes I think that's no longer the case."

On Thursday, in fact, it was still unknown whether the horse who was supposed to be the race's superstar -- 2-year-old champion and 9-2 second choice Uncle Mo -- would compete. After entering and drawing Post 18, his connections were planning an 11th-hour decision amid swirling rumors that the colt had not yet recovered from the gastrointestinal tract infection that was blamed for his third-place finish last time out in the April 9 Wood Memorial. An announcement as to whether he would run is expected Friday from trainer Todd Pletcher and owner Mike Repole, as memories harkened back to the raceday scratch of 2009 Kentucky Derby favorite I Want Revenge.

"I'd like to have Lookin at Lucky in this field," Hall of Fame trainer Bob Baffert said Monday morning. Last year, the son of Smart Strike started as the 6-5 favorite in the Derby but suffered a horrendous trip from Post 1. He came back to win the Preakness and went on to be named the season's best 3-year-old -- the only horse since Spectacular Bid in 1978 and 1979 to be named champion of his division at both 2 and 3 -- after victories in the Haskell Invitational and Indiana Derby.