SOUTH WILLIAMSPORT, Pa. -- With the game tied in extra
innings, a tiring reliever on the mound and the Little League World
Series championship on the line, Michael Memea had a simple plan:
make contact.
West Oahu of Ewa Beach, Hawaii had already completed a stunning
comeback Sunday over the defending champions from Willemstad,
Curacao, scoring three runs in the bottom of the sixth to tie the
game. 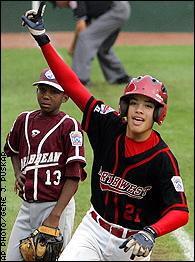 Now here was Memea at the plate in the bottom of the seventh
with nobody on and nobody out.
No matter: Memea lined a pitch over the center-field wall to
give Hawaii a 7-6 win, the first game-ending home run in a Little
League championship game.
"I knew it was gone," Memea said afterward, a necklace made of
candy pieces strewn around his neck.
After the homer, Memea rounded third with his right hand held
high and barreled toward jubilant teammates waiting for him at home
plate. Later, he and his teammates took the traditional victory jog
around the Lamade Stadium warning track, drawing cheers from fans.
Manager Layton Aliviado planned to give his team some time to
unwind before the flight back to Hawaii on Monday. West Oahu is the
first team from Hawaii to win a Little League World Series title.
"Today, I'm real happy. Our dream came true," he said with the
winner's plaque sitting on his lap. "You guys can jump in the pool
if you'd like."
Before their sixth-inning rally -- sending the title game to
extra innings for just the second time -- Aliviado said he told his
team: "If you guys want it, let's go get it."
With runners on second and third and nobody out, Vonn Fe'ao
scored from third on a bunt base hit by Ty Tirpak. Zachary Rosete
then hit an RBI single to left close the gap to 6-5.
Three batters and one out later, Alaka'i Aglipay hit a bouncer
to second that looked like it would be an easy double play, but he
beat out the throw to first, allowing Rosete to score the tying
run.
"We didn't expect them to come back like that in the sixth,"
Curacao manager Vernon Isabella said through an interpreter.
Hawaii's runs in the sixth and seventh innings came off reliever
Christopher Garia, who was entering his fourth inning of work when
Memea came to bat in the seventh.
"I knew he was tired but I asked him to go the extra mile,"
Isabella said. "I didn't notice any flaws in his mechanics and the
extra time in between innings did not hurt us."
Memea and his teammates were later asked if they had to return
to school this week.
"Yeah," they said in unison.
Were they looking forward to it? "No," they groaned.
The Curacao team from the Pabao Little League was trying to
become the first repeat winners in South Williamsport since Long
Beach, Calif., won back-to-back titles in 1992-93.
Sorick Liberia had broken open a 3-3 game in the fifth with a
two-run homer that soared beyond a short hill past the left-field
wall. Darren Seferina added a solo shot to give Curacao its
three-run lead.
The homers drew loud cheers from the small contingent of Curacao
fans holding the country's blue and yellow flag and wearing hats of
the same color.
Braves slugger Andruw Jones, who is from Willemstad, was
watching the game on television from Milwaukee after hitting his
major league-leading 41st and 42nd home runs during Atlanta's 5-2
win over the Brewers. Most of Curacao's players at the Little
League World Series call him their favorite player.
"It's great to see," Jones said in between yelling at the TV
and playfully taunting his teammates. "There's a lot of talent
down there."
Down a run with two outs in the third, Curacao took a 3-1 lead
thanks in part to a confusing play that started with an RBI single
to right by Jurickson Profar.
The ball got by outfielder Rosete for an error and on the throw
in, Rayshelon Carolina got caught in a rundown but scored after
pitcher Quentin Guevara appeared to miss the tag at home.
Profar moved to third amid the confusion, then was singled home
by Liberia.
West Oahu had a tournament-leading 10 home runs coming into the
game.
Also on Sunday, Ryan Gura lined an RBI single with one out in
the bottom of the sixth inning to break a tie and lift Rancho Buena
Vista of Vista, Calif. over Chiba City, Japan, 5-4 in the
consolation game.
Johnny Dee started the winning rally with a one-out walk. Daniel
Gibney blooped a single into left field just out of the reach of
Yusuke Taira before Gura hit the game winner.