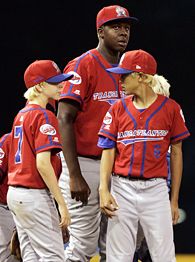 "I was standing next to him and I was up to his elbows," Scott Kingery, a 12-year-old, 4-foot-9 Phoenix shortstop, said after meeting Durley.

At the secluded dorms where teams stay during the tournament, Durley has become as much of an attraction as the pool, the pingpong table and the video arcade.

The soft-spoken Durley doesn't mind the attention. He even lets opponents snap pictures with him during down time.

But Durley, who played at the Series last year, too -- when he was a mere 6-foot-4 -- is crystal-clear about his top priority in South Williamsport.

"I'm more confident this year, ready to do what I need to do," Durley said after a practice. "Hit the ball out."

Durley, batting fifth, didn't hit a homer, but he walked twice, singled and scored a run Sunday when his Arabian American squad from Dhahran defeated Saipan 9-1. Saudi Arabia (2-0) stands a good chance of advancing out of pool play after failing to win a game last year.

Arabian American is a fixture at the World Series, having qualified the past seven years, and 12 of the past 13. The players' parents primarily work for oil companies in the Middle East.

Dhahran might have had the longest road to Pennsylvania, qualifying for the Series by winning the Transatlantic region tournament in Kutno, Poland, in late July.

The team has a peculiar baseball superstition -- the players dye their hair blond for the World Series.

As if Durley wasn't easy enough to pick out in a crowd.

Columbia, Mo. manager Jeff Echelmeier watched Durley attract attention while the player was standing on a porch near a path to the cafeteria.

"About four teams came through, and everyone wanted to know how tall he was," Echelmeier said. "He said, 'About 6-foot-8' about 40 times in a row."

Aaron's mother, Dana Durley, said her son didn't understand how much taller he was than most kids until he stayed at the Little League dorms last year.

"He takes it in stride," she said Sunday night after her son's team won. "He's been reared to say that the only thing you can control is your behavior. You can't control what other people think."

Aaron, who also plays basketball, isn't the only tall guy on his team. Durley nearly stands toe-to-toe with his manager and father, James Durley.

Dhahran pitcher and outfielder Michael Knight is 6-foot-3, 190 pounds. Five-foot-8, 226-pound, third baseman Andrew Holden is a dangerous hitter, having homered twice in the series, including a three-run blast against Saipan.

Team followers said it was just coincidence that there were so many tall players on the squad.