A well-deserved break for the 12-year-old from Columbus, Ga. He
came up with two clutch extra-base hits Thursday night to send his
team to the U.S. title game of the Little League World Series. 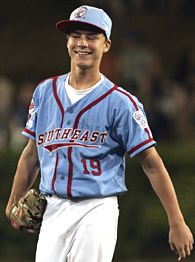 Lester hit a base-loaded triple in the second inning and doubled
in two more runs in the fourth in Columbus' 8-0 win over
Portsmouth, N.H. Both hits came after Portsmouth intentionally
walked slugger Kyle Carter to get to Lester.

"It just motivates me when they walk him," Lester said,
displaying a cheeky smile. "It just makes me want to get a hit
more."

Carter was pretty good himself on the mound, striking out eight
and tossing a three-hitter for the Columbus Northern league team
(3-1). They will face Beaverton, Ore., on Saturday, with the winner
advancing to the World Series championship game Sunday.

Players slapped hands and a coach tossed the ball from the final
out to Lester before the team waved to cheering and whistling fans
standing three-deep in the stadium aisles.

Carter, who hasn't allowed an earned run in South Williamsport,
is pretty good at the plate, too. He had hit 52 home runs this
season before arriving at the series and added a two-run blast to
center in the fifth on Thursday.

"I think in the fifth, you saw why we were walking Carter,"
Portsmouth manager Mark McCauley said. "Our game plan going in was
to hit the ball hard, hopefully, eventually they would fall in. We
hit the ball hard in the beginning, but we just couldn't stop them
from scoring runs."

Opposing managers have taken to walking Carter, at times even
with nobody on base.

Lester's triple in the second came after Portsmouth
intentionally walked Carter with runners already on second and
third and two outs. Lester drove a 1-2 pitch from Keegan Taylor to
the right-center field wall, clearing the bases. Cody Walker
followed with a solid single to left scoring Lester.

Lester added a two-run double in the fourth after another
intentional walk to Carter.

Lester doesn't envy the decision opposing mangers have when
Carter comes to the plate.