SOUTH WILLIAMSPORT, Pa. -- The Little Leaguers from Columbus, Ga., sure are well-schooled in some of the fundamentals of baseball.

Brady Hamilton drove in two runs, J.T. Phillips struck out eight
and Josh Lester made a nice grab of a line drive to thwart a rally,
helping Columbus defeat Beaverton, Ore., 7-3 on Saturday to win the
U.S. title and advance to the championship game of the Little
League World Series. 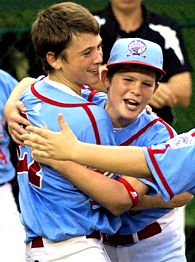 Hamilton broke a 3-3 tie by flaring a pitch from starter Jace
Fry just out of the shortstop's reach to score Phillips from second
in the fifth inning. Columbus got some breathing room with three
runs in the sixth, including another clutch hit by Lester that
drove home Ryan Lang.

Cody Walker tracked a popup in foul territory and stumbled to
the ground on his back just after catching it for the final out.
Jubilant teammates started piling on top of him as parents cheered
and snapped pictures.

After receiving their championship banner, the Columbus boys
raced to the Beaverton dugout and invited their opponents to
accompany them on the honorary victory lap around Lamade Stadium.

But only Columbus gets to play in the title game Sunday, against
Kawaguchi City, Japan, which beat Matamoros, Mexico, 3-0 in the nightcap.

"I said after the semifinals that everything is gravy,"
Columbus manager Randy Morris said. "We were loose before the
game, and I think that really helps us."

The Columbus Northern league team looked like it'd be an easy
winner at first against Beaverton's Murrayhill league team. The
Georgia fans chanted, "Here we go Southwest, here we go!" as
their team returned to the dugout after a three-run first inning.

Momentum changed in the fourth.

Beaverton's Austin Perry had an RBI single to cut the lead to
3-1.

Then with two outs and Perry on second, Trevor Nix hit a high
fly that carried. The 13-year-old pumped his fist after watching
the ball land over the fence for a two-run homer that tied the
game.

Beaverton's fortunes changed quickly when Columbus returned to
the plate in the fifth and Hamilton's looping single over Keller
drove in the go-ahead run.

Columbus put the game away in the sixth.

With a runner on third with one out, Fry intentionally walked
slugger Kyle Carter to get to Lester. Carter had hit 52 homers
coming into the tournament, and fearful teams have often given him
a free pass, even with no one on base.

Lester drove in five runs his last game after intentional walks,
and he came through again Saturday, lining a single to center that
sparked the three-run sixth to give Columbus a 7-3 lead.

Lester, playing shortstop, also made a nice stab of a liner by
Beaverton's Sam Albert to help douse a scoring threat in the first
inning. With runners at first and second, Albert hit a shot up the
middle. But Lester quickly took a couple of steps to his left, made
the catch and fell to one knee.

Keller's eyes began tearing a bit after the game. He said he
would give his son, who struck out in three at-bats, a hug.

"I told him after the game, I didn't care how he played," Jeff
Keller said.

But he thinks his son will get over the loss quickly.

"Football starts in three days," the manager said. "When he
gets under center and starts throwing the ball around, I think
he'll be OK."