OKLAHOMA CITY -- Dwight Howard started it with a simple two-handed dunk. J.R. Smith took it to the next level by adding a 360-degree slam.

But Carmelo Anthony and Jay Williams got to their feet when Josh
Smith came from behind to swat DeMarcus Nelson's dunk try. He then
followed it up with a right-handed jam at the other end. 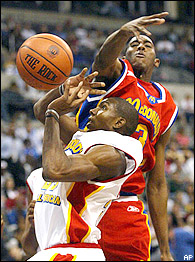 The athletic skill of the three all-stars and their teammates
was too much as the East beat the West 126-96 in the McDonald's
All-American game Wednesday night.

J.R. Smith, who had a somewhat low profile among a handful of
prospects expected to jump directly to the NBA, led the East with
25 points.

"Coming out and doing this when it's unexpected makes it even
better," said Smith, a 6-foot-6 guard from Newark, N.J., who is
headed to North Carolina for college.

Howard scored 19, Al Jefferson added 16 and Rajon Rondo had 14
for the East.

The East, which led by 11 at halftime, pulled away with a 21-2
spurt to start the second half.

Smith dunked three times during the run and Rudy Gay scored
the final eight points of the outburst with two 3-pointers and a
layup to put the East ahead 77-47 with 16:12 to play.

The West got within 90-69 on a free throw by Shaun Livingston
with 9:32 to go, but Smith and Howard stretched the lead again
with highlight reel plays.

Smith coaxed Anthony to his feet again after drilling a
30-foot 3-pointer right in front the Denver Nuggets star's
courtside seat. It was his second of back-to-back 3-pointers.

"When I saw Carmelo out here, it gave me a little extra
something," he said.

Howard, a 6-foot-10 forward from Atlanta who is projected by
some to be the No. 1 pick in the NBA draft, followed with
two-handed jams on consecutive possessions and the East led 100-71.

Howard and Smith were named co-MVPs. Nelson led the West
with 22 points.

Howard said the NBA wasn't on his mind yet.

Josh Smith skied for a two-handed jam in the second half and
finished with seven points. The Indiana high school star played in
his third all-star game, making him ineligible to uphold his
commitment to his home-state Hoosiers.

But he said he still hadn't made a solid decision. He said he
planned to make his choice after playing in another all-star game.

"It's a good feeling for me to get invited to these games and
for me to play in them," he said. "It's just an honor to have my
name with the future stars and the guys in the NBA."

Sebastian Telfair, the Brooklyn point guard considered to be an
NBA lottery pick, had foul trouble and played only 20 minutes. At
one point midway through the first half, Telfair turned to the
bench and said, "Coach, write that assist down." He finished with
11 assists and only two points.

"Everyone here can score. If we weren't able to score, we
wouldn't be here," Telfair said. "I know that other guys were
talking about how they wanted to score a lot of points. I decided
that I wanted to be the one to distribute the ball to make sure
they get their points.

"Being the floor general, being a point guard, that's what a
point guard does."

Telfair, who has committed to Louisville, said he wasn't
changing his mind about the NBA, at least yet.

"Let's finish up this week and have fun," Telfair said. "I'm
not really thinking about nothing right now."