SOUTH BEND, Ind. -- If Duke coach Mike Krzyzewski was
watching the McDonald's All-American game, he must have liked what
he saw.

Josh McRoberts, who has committed to the Blue Devils, was named
the game's MVP with 17 points on 7-of-8 shooting with a game-high
12 rebounds. And Duke's incoming point guard Greg Paulus had nine
assists and 13 points, making 7-of-8 free throws in the final 2
minutes to help the East hang on for a 115-110 victory Wednesday
night. 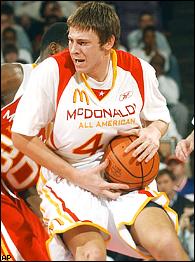 McRoberts, who is from Carmel, Ind., was surprised when he heard
he was named the MVP.

"I never even thought about it during the game. I was just
trying to go out there and play hard," he said.

It didn't look as though the East was going to have to play hard
all game to win big.

"We needed some points but nobody was hitting their shots, so
that's when I stepped in," Chalmers said.

Gerald Green, the game's leading scorer with 24, and Eric
Devendorf hit 3-pointers to extend the lead back to 80-69. But the
East couldn't put the West away. Calvin Miles hit a 3-pointer to
close the lead to 100-96. The West finally pulled even when Monta
Ellis drove to the basket with 1:47 left, then scored on a
fast-break slam dunk to make it 106-106 with 1:25 left.

Green hit a pair of free throws to put the East back on top,
then Paulus put the game away with his free throws.

Unlike in some recent years, none of the players taking part in
the game have said they would go directly to the NBA. Green has
been mentioned as a possible lottery pick, but he said after the
game he's going to Oklahoma State.

Louis Williams, who is committed to Georgia, added 14 points and
Devendorf, who is going to Syracuse, added 13. The East shot 57
percent in the first half, 43 percent in the second.

Chalmers led the West with 20 points, Julian Wright, who is
going to Kansas, had 14 and Miles, who is headed to Texas, had 13. The
West shot 45 percent for the game.

The East took command early as Green scored 11 points during a
39-13 run.

"My teammates just told me to shoot, so I did what my teammates
wanted," Green said.