ROCHESTER, N.Y. -- President Bush is the latest in a string of high-profile fans to call on Jason McElwain, the autistic basketball manager who drew national cheers by scoring 20 points in four minutes for his high school team. 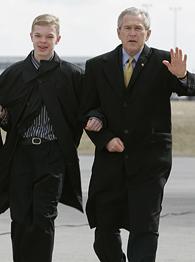 On his way to Canandaigua, N.Y., Tuesday to speak at Medicare events, Bush stopped at an airport near here and greeted McElwain, who was accompanied by his parents and coach, and called him "a special
person."

"Our country was captivated by an amazing story on the basketball court," the president told reporters gathered on the
tarmac, his arm draped around the 17-year-old senior, with Air
Force One, the presidential jet, in the background. "It's the
story of a young man who found his touch on the basketball court,
which in turn touched the hearts of citizens all around the
country."

The president joked that if his aging body would let him return
to the basketball court, he'd want a lesson from McElwain.

Because of his autism, McElwain didn't begin talking until
he was 5 and still lacks some social skills. Despite suffering
from the little understood developmental disorder, he has served as
all-around motivator for the Greece Athena High School basketball
team, in Greece, N.Y., a Rochester suburb.

Last month, the coach had him suit up for the final home game of
the season and put him in with four minutes to go when the team
opened a large lead. In his first and only appearance for the team,
the 5-foot-6 manager hit six 3-point shots and a 2-pointer and was
carried off the court on his teammates' shoulders.

The jaw-dropping performance was caught on a student video and
made national news. His parents have received a flood of calls from
Hollywood.

Bush said he learned about McElwain from seeing him on TV.

"I wept, just like a lot of other people did," he said, as
McElwain beamed beside him.