KINGSTON, Jamaica -- Pakistan cricket coach Bob Woolmer died
in a hospital Sunday, less than an hour after being found
unconscious in his hotel room. He was 58.

The cause of death was not immediately released. 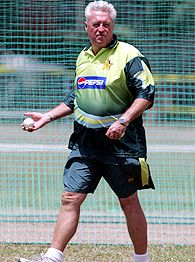 Woolmer was a former England test batsman and coach of South
Africa.

Pervez Jamil Mir, the Pakistani team's media manager, said
Woolmer was taken to the emergency ward at University Hospital of
the West Indies after being found on the floor of his room.

Clive Lloyd, who led the West Indies to the first World Cup
title in 1975 and is manager of the current team, said Woolmer
"was a great guy and a really great coach."

"It's sad that such a tragedy should take place in the World
Cup," Lloyd said. "I feel sad for his family."

Woolmer's contract with the Pakistani team was due to expire
after the World Cup and was unlikely to be renewed following the
team's shocking loss Saturday to Ireland. Pakistan cannot advance
beyond the first round and has only one group match left against
Zimbabwe.

Woolmer worked as a coach on three continents, including a stint
for the International Cricket Council helping to develop cricket
nations.

"Our thoughts are with Bob's family," England Cricket Board
spokesman Andrew Walpole said. "This has come as a huge shock to
all of the England team. He was a figure who commanded great
respect within world cricket and he will be sorely missed."