I wasn't surprised when after the first set of the Australian Open final, Justine Henin-Hardenne went into the locker room and did what so many players do when they are losing: Take an extended bathroom break and maybe call the trainer.

It happens so often, and that's what I thought was going on.

But trailing 2-0 in the second set, when she took that first step to the net after the injury time out and said she couldn't continue, that's when my stomach hit the floor.

A major final to a tennis player is sacred ground. Short of any type of serious injury -- soft-tissue tears, serious orthopedic injuries or a major illness like throwing up, dehydration or cramping -- you keep going, especially in the final of a Slam.

Henin-Hardenne obviously wasn't 100 percent and had some stomach discomfort. Only she knows how much, but to see her call it was stunning to me. 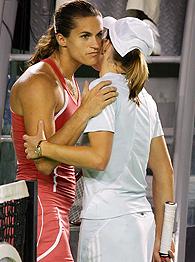 She has been one of the great warriors of women's tennis the last three years. My respect level disintegrated when I not only saw what happened on the court, but when I took in the press conference.

I was incredibly disappointed with her rationale of quitting. She didn't feel like she had enough on her shots, knew she didn't have it and didn't sleep well. I'm sorry, this is a major final. It's almost like it didn't occur to her what she had just done. (She's just the fourth player to retire in a women's final of a Grand Slam.)

When she's been on the court playing the game she's been the best competitor in women's tennis. So what got into her to throw in the towel?

In my mind, the only thing that may have justified it is if she thought the virus condition which cost her most of the 2004 season could come back and be triggered by whatever she was feeling.

It had to be something more major than just a poor anti-inflammatory reaction in the stomach. I took more anti-inflammatories probably than anybody in my 20 years of playing and I know what that terrible stomach pain can be. I also know what terrible menstruation cramps can be, as most women tennis players have, to the point where you feel nauseous, but you just play on.

So much still could have happened in that match. Amelie Mauresmo has never closed out a Grand Slam final before. It's possible you start to feel a little bit better. You give every last shot.

Is Henin-Hardenne that flushed having won four major titles that the fifth one she could just discard when she was down 2-0 in the second set?

In regular tournaments, players throw in the towel occasionally for one reason or another. Clearly Henin-Hardenne was sub-par, but that doesn't matter. There are certain caliber events -- Olympics, major finals, Daytona 500, the Masters, Super Bowl --- where you just suck it up.

Can you imagine how many of the Pittsburgh Steelers and Seattle Seahawks are going to have massive physical problems in the Super Bowl? And they are going to suck it up.

I got to one Grand Slam final, and that's what you shoot for as a player. Henin-Hardenne just wasted one because her stomach was hurting a lot?

I think Henin-Hardenne's reputation is tarnished forever. The tennis beat writers will never let her forget this. And it's not a first. Remember there was the 2003 French Open serving incident against Serena Williams, when she held her hand up on a Williams serve to signal she wasn't ready, then pretended like she did nothing.

She is going to be known as much for these incidents on the court as she is for all the Grand Slam finals she won.

Roberto Duran was a great fighter, but what is he known for? No mas, no mas (in his 1980 rematch against Sugar Ray Leonard).

Time will tell, and maybe some better explanation will come out in a month or two. Maybe there is a better reason and there's still a chance for this to make sense.

But so far it doesn't.

ESPN tennis analyst Pam Shriver won 21 singles and 112 doubles crowns, including 22 Grand Slam titles, and was inducted into the International Tennis Hall of Fame in 2002.