The conclusion, however, was a bit anticlimactic.

Mauresmo's long wait ended Saturday when Justine Henin-Hardenne
retired in the second set of their Australian Open final because of
stomach pain. 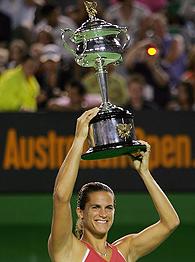 Mauresmo led 6-1, 2-0 when Henin-Hardenne walked to the net and
told the umpire she could not continue. Suddenly a champion,
Mauresmo was taken aback for a few moments. She consoled
Henin-Hardenne, then took her time to walk back onto the court and
hold her arms up in triumph.

"Walking back to my chair, I realized the tournament was
mine," Mauresmo said. "I guess the way I reacted would have been
different if the match went to the end. But the joy is here
I've been waiting for this a long time."

The third-seeded Mauresmo translated a French expression to sum
up the quick finish.

"In French, we have a saying: The sadness of some makes the
happiness of others," she said. "Things turn around at some
point. I had some tough moments myself."

The doubters increased as Mauresmo, who previously held the No.
1 ranking and had long been a contender, had failed to reach a
final since losing the 1999 title match at Melbourne Park to
Martina Hingis.

"A lot of people were saying, 'She's not going to get there,'
talking about Grand Slams," Mauresmo said.

In the first set against Henin-Hardenne, she said she put "the
emotion part really on the side."

"I knew exactly what I had to do  and everything came
together," she said. "The three main things of the game -- tennis,
physical and mental -- they all come together perfectly."

Mauresmo planned to celebrate by opening a 1937 bottle of wine
she bought three or four years ago and was saving to drink at the
right moment.

It was the second consecutive match and third in the tournament
that an opponent retired due to illness or injury against Mauresmo.

Michaella Krajicek retired with heat stress in the third round
and second-seeded Kim Clijsters retired after turning her ankle
early in the third set of their semifinal on Thursday. 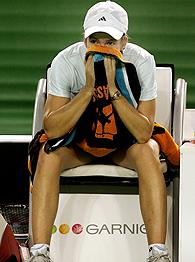 Margaret Court Smith won an Australian Open title in 1965 when
Maria Bueno retired in the third set with an injured ankle. She won
by walkover the following year when Nancy Richey withdrew before
the final.

Mauresmo said she had experienced some dark moments in
Australia, including the controversy surrounding her run to the
final in '99 when she was described as "half a man" by Hingis.
Critics had condemned her as a choker at the big moments.

But things started turning around for her when she won the
season-ending WTA Championship in Los Angeles last November, giving
her renewed hope in Australia.

"Winning the WTA Championship and coming back and winning here,
too -- I feel great. I'm proud of myself," she said. "Winning in
L.A. gave me a lot of confidence."

Mauresmo had the third-longest wait for her first major title in the Open era, taking 32 Grand Slam tournaments to win a final.

Jana Novotna won Wimbledon in her 45th major and Kerry Melville-Reid won the Australian Open in her 39th.

"It's been such a long time, and yet I still don't know what to
say," Mauresmo told the crowd. "All the people that still
believed in me, after seven years -- it's a long time. Not only
myself, but people who're working with me, believed me and pushed
me, even when I was down.

Henin-Hardenne, seeded eighth, held for the only time in the
sixth game, losing the first set in 33 minutes on consecutive
forehand errors. She got only 29 percent of her first serves in.

Mauresmo broke serve and then held again before Henin-Hardenne
called for the trainer. She lost two more points before retiring.

"I was feeling so sick and I couldn't stay longer on the
court," Henin-Hardenne said. "I'm feeling very disappointed to
end the tournament this way.

Henin-Hardenne, who has four Grand Slam singles titles and was
on a 13-match winning streak at Melbourne Park, burst into tears
when she reached a courtside chair after quitting.

Storms outside produced the only thunder of the match. The roof
was closed on Rod Laver Arena, trapping several birds inside, and
they chirped loudly throughout.

Henin-Hardenne had been a slow starter in the last two rounds,
dropping the first set against Lindsay Davenport in the
quarterfinals and Maria Sharapova in the semis before rallying.

It looked to be the same against Mauresmo as the Belgian lost 19
of the first 24 points, committing a rash of mistakes.

Mauresmo fended off the only breakpoint she faced to make it 5-0
before Henin-Hardenne held serve for the only time, sparking a loud
ovation.

But as the match wore on, Mauresmo seemed to sense that her
opponent was off her game or ill. She was increasingly content just
to keep the ball in play until Henin-Hardenne made a mistake.

There were only nine combined winners in the nine games and 31
unforced errors, 20 by Henin-Hardenne.