MELBOURNE, Australia -- Serena Williams knew it had been
quite some time since her last victory over a Top 10 player. When
told it had been two years, the American star shook her head and
laughed in disbelief. 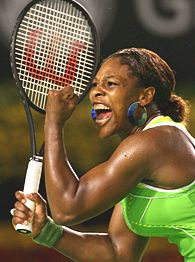 "Has it been that long? That's a terrible stat," Williams said
Friday after beating fifth-seeded Nadia Petrova 1-6, 7-5, 6-3 in
the third round of the Australian Open.

It was Williams' first win over a Top 10 player since she won
the 2005 event for her seventh and final major singles title,
beating Amelie Mauresmo in the quarterfinals, fending off match
points against Maria Sharapova in the semis and overcoming Lindsay
Davenport in the final.

Defending champion Amelie Mauresmo beat the Czech Republic's Eva
Birnerova 6-3, 6-1. The second-seeded Mauresmo will play another
Czech, Lucie Safarova, in the fourth round. Safarova advanced when
Anastasiya Yakimova retired with a back injury after losing the
first set 6-3.

Limited to four tournaments last year because of a chronic knee
injury, Williams dropped out of the top 100 for the first time
since 1997 before climbing back to 95th in the year-end rankings.

She made 18 unforced errors, many just missing the lines, and
dropped serve twice in the first set.