MELBOURNE, Australia -- Serena Williams answered her critics
with an overpowering victory in the Australian Open final. 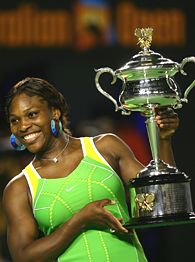 "It was an awesome win, because I had so many critics. So many
people ... saying negative things," Williams said. "Saying I
wasn't fit, when I felt that I was really fit, and I could last
three sets.

"It's always like, tell me no and I'll show you that I can do
it. I get the greatest satisfaction just holding up the Grand Slam
trophy and proving everyone wrong."

Only the second unseeded woman to win the Australian title in
the Open era, Williams came to Melbourne Park with only three
matches at a low-key warmup tournament after missing most of last
season because of a knee injury.

She will jump to No. 14 in the world next week after capturing
her first title in 15 tournaments since her second Australian Open
victory in 2005.

Despite doubts about her fitness, Williams thought she was in
great shape.