MELBOURNE, Australia -- Roger Federer held back the tears
this time. He didn't hold back much else at the Australian Open. 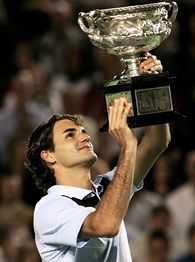 "Equaling records, doing something that hasn't been done for a
long time, it's really nice, no doubt," Federer said. "All I care
about in the end is to hopefully hold that trophy. Of course, now
that it's over, it's great to think, 'Wow, you know, not having
dropped a set.' It's quite amazing."

Rosewall was in the crowd Sunday night, and Federer gave him a
nod in a composed victory speech. It was the mere presence of
another Australian great, Rod Laver, that reduced Federer to tears
the previous year at the trophy presentation.