By Matt Wilansky, ESPN.com
Roger Federer is sure to shine Down Under while Maria Sharapova looks to back up her No. 1 seeding.

This is also the time of year tennis pundits discuss dark horses for the season. Last year, Marcos Baghdatis crawled out of the woodwork and reached the final of the year's first major. (The Cypriot had never previously advanced past the fourth round of any major.) It's rare that we witness such an unheralded player make a run like that. Dating back to the Open era (1969), only 10 players ranked 20th or lower have reached the Australian Open final. What's typically forgotten, though, are those less-recognized players who make deep runs, not necessarily to the final, but last into the second week long enough to make a statement.

Which players, ranked outside the top 20, could still be around during the second week of the Australian Open?

He's probably better known as the fiancé of Martina Hingis than a top-tier player, but the Czech could be a dangerous floater in the draw. After cracking the top 10 for the first time in his career in 2006, Stepanek suffered a back injury shortly after Wimbledon which kept him out of action for the remainder of the season. He did have a career-best quarterfinal finish at Wimbledon, the best run of his career in a Grand Slam.

Last season, Stepanek went down in the second round of the Australian and has never advanced past the third round there. It might take time before he's able to regain his form considering the amount of action he missed, but there's no doubt Stepanek has the tools to make a run Down Under.

Without question, the highlight of his career was his 17-15 five-set win over Andy Roddick in last season's Davis Cup semifinal. It was the clinching match that sent Russia into the final.

His triumph over Roddick was a fitting way to close out 2006. Tursonov made tremendous strides and finished the year ranked No. 22 in the world, a career high. His season was also highlighted by his first two finals appearances, including a title in Mumbai. Tursonov will compete at the Australian Open for the third time in his career. Although he's won only one match in two appearances, all indications are this 24-year-old Russian is ready to shine in 2007. 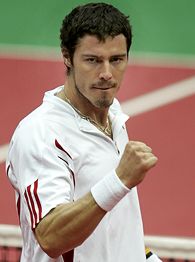 AP Photo/Ivan SekretarevOnly a handful of players can match Marat Safin's skills on the court.

No. 26 Marat Safin
It's well known that Rafael Nadal has been the one player who's kept Federer from winning the French Open. But who is the only player other than Nadal to knock Federer out of a Grand Slam in the last two seasons? Safin. This Russian has world-class talent, but the downside is he's the most unpredictable player on the planet. He is one of just four active players who have won multiple Grand Slam titles; but for all his accolades, he has disappointed even more. Since upsetting Federer in Melbourne two years ago, Safin has failed to reach a quarterfinal at a major.

Safin's late-season surge was enough to propel him into the top 30 for the seventh time in the last eight years. To his credit, his Australian Open results have been stellar: In seven appearances, Safin has reached the final on three occasions, including his '05 championship.

No. 21 Li Na
In 2006, the 24-year-old made history, becoming the first Chinese player to crack the top 30, and the first Chinese competitor to reach a Grand Slam quarterfinal (she lost at Wimbledon in three sets to Kim Clijsters). Na reached one final in 2006, losing to countrywoman Zheng Jie in Estoril in the first-ever all-Chinese final. She has only one career title (Guangzhou, China, in 2004), but Na has seen her world ranking rise in each season since 2001, the year she finished No. 303. With a strong showing at the Australian Open, she could find herself in the top 20 for the first time.

No. 29 Maria Kirilenko
Early in 2006, Kirilenko had promising results, including a third-round appearance at the Australian Open before falling to top-seeded Lindsay Davenport in three sets. Kirilenko advanced to three separate quarterfinals early in the season, and reached the top 20 for the first time in her career. However, when the grass-court season began, the Russian faltered and never regained her momentum. In the nearly two months leading up to the U.S. Open, Kirilenko won just a single match, and in her final 12 events of the season, she won a total of six matches. Despite her inconsistency, Kirilenko did go 7-4 in the four Grand Slam events, and at just 20 years old, she has the potential to be one of the most improved players in 2007.

No. 94 Serena Williams
Hard to believe it's been four years since Williams dominated women's tennis. As it stands now, the seven-time Grand Slam champion is barely in the top 100. Last year, Williams played just 16 matches, her fewest since 1997. Furthermore, questions about her fitness and determination along with a well-documented court battle have overshadowed any of her accomplishments. She is a two-time Australian Open champion; however, her 2005 title represents the last time she won a tournament.

After a four-month hiatus following the U.S. Open, Williams won two matches before succumbing to unseeded Sybille Bammer in her 2007 debut in Hobart, Australia. However, with her power and championship experience, a couple of early-round wins could give Williams enough confidence to make a deep run.