KEY BISCAYNE, Fla. -- At 29, doubles specialist Corina Morariu couldn't be more relaxed about the fact that her competitive career is winding down. She's playing a limited schedule in her 14th season as a professional and beginning to explore options for life after tennis, while thoroughly enjoying every time she's able to step on the court. 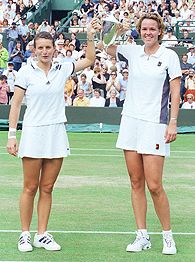 That pleasure -- and many more -- were nearly taken from her forever back in 2001 when Morariu was diagnosed with leukemia. She defied her prognosis and lived to play again, although chemotherapy and a subsequent shoulder surgery robbed her of the strength and endurance she needed to play singles -- where she had climbed as far as No. 29 in 1998.

The experience of being forced to take that fork in the road is still fresh in some ways.

"Overall, I wouldn't trade the appreciation and perspective I have on life now. It's just tough to see people I competed well against still being able to play singles. It's a constant reminder."

The 2007 season will have a different feel for the Detroit-born, Florida-raised Morariu, who was ranked No. 1 in the world in doubles in 2000. It's her first go-round in many years without her best friend and longtime doubles partner Lindsay Davenport, with whom she won five doubles titles and reached the 2005 Australian Open final -- an unexpected and emotional achievement so many years after Morariu's comeback.

"I could not have been happier for her when she got pregnant -- and I was so happy it finally became public, because I thought I was going to blab," Morariu said.

The two live close to each other in southern California and see each other frequently, but Morariu said traveling on the circuit will never be the same for her.

"She was like a sister to me on the road," Morariu said. "And besides our chemistry, she was a great player.

"You don't have a lot of close friendships on the tour, and you have a lot of down time. We love spending time together. Being in Australia without her was a big adjustment for me. She's so sweet now. She follows my scores on line and she texts me all the time."

One more round (robin): ATP director of business development George Ciz, who coordinates the consumer research the tour is doing on how receptive fans would be to potential changes in the game, said round robin is shelved, not dead. But he admitted that the mathematical riddle posed by withdrawals -- i.e., how to penalize players for withdrawing without unduly affecting other players -- is daunting.

The four-player groups used in the year-end championships aren't practical during the regular season, Ciz said. Although they create fewer chances for ties between players, he said they also multiply dead matches and total matches.

Ciz shared some of the background research done by the ATP last year and this year. Some questions posed to fans are striking and drop more than subtle hints about directions the ATP is considering.

When casual fans were asked to pick from a list of potential reforms or tweaks that would encourage them to watch more tennis on television, among the top answers were: "having all the top players take part in the event," "making it easier to follow the season," "eight- or nine-day tournaments with big opening days" and "best-of-three finals."

Teenybopper: The WTA's Comeback Player of the Year and the Newcomer of the Year posed side-by-side with their trophies just 24 hours before they played each other in the third round.

No. 6 Martina Hingis earned her award for her inexorable march back to the top 10 after three years away from the game. Agnieszka Radwanska was honored for reaching the fourth round in her Grand Slam debut at Wimbledon, going deep in a couple of WTA events, beating veterans Venus Williams and Anastasia Myskina and finishing the year at No. 57.

There was more to the photograph than met the eye. Hingis was Radwanska's childhood heroine when she was growing up in Poland. For psychological reasons alone, their match looked predictable on paper, but it was the 18-year-old Radwanska who sent one-time teen prodigy Hingis to the shredder on Sunday in a seesaw three-setter. "I didn't believe I can beat her, because she's my favorite, of course," Radwanska said.

Radwanska, now ranked 49th, is the top player from her country, and she and younger sister Urszula pretty much constitute the Polish Fed Cup team. She brought books to Miami so she could study for her final high school exams in May. She has two black-and-white pet rats named Flippy and Floppy, whom she considers as warm and fuzzy as kittens.

Since she's not scared of rodents, perhaps her draw doesn't faze her either. If she can beat 25th-ranked Tathiana Garbin of Italy in the fourth round, she'll take on the winner of the Svetlana Kuznetsova-Shahar Peer match in the quarterfinals.

Luck of the draw: Robert Kendrick cracked the top 100 at the end of 2006, a milestone for a player who'd been treading water in the six years since his strong collegiate career. Pushing Rafael Nadal to five sets at Wimbledon was a highlight, but it was success in lower-level Challenger events that gave Kendrick automatic entry into the main draw of a Grand Slam event for the first time in Australia. He's gunning to be there for the French Open as well.

Kendrick, currently ranked 87th, slid into the bracket here in Key Biscayne as a "lucky loser," someone who doesn't get through the qualifying tournament but is tapped to replace a player who withdraws before his first-round match (Lleyton Hewitt in this case). He got the call the night before when he was out watching an NCAA basketball game and having a couple of drinks with his pal Robby Ginepri.

The 27-year-old Californian then took full advantage, upsetting Raemon Sluiter of the Netherlands in the second round. He jokingly dedicated his win to a particular brand of vodka but later regretted the levity. "It got all blown out of proportion, like I was out dancing all night in South Beach," he said Sunday.

Kendrick lost to Andy Murray in the third round on Sunday. Now it's back to the Challenger circuit, where he won an event in Dallas last month. Going from one to the other and back can result in a little whiplash, he said.

"I come up here and my confidence isn't the same," Kendrick said. "Then I go back down there and guys are more intimidated by me. The shots I'm making in [Challengers] don't seem to go in here. It may be a matter of giving guys too much respect."

He plans to stay in the U.S. and play clay court Challengers and the U.S. Clay Court Championships in Houston before he heads to France.