WINSTON-SALEM, N.C. -- A father's presence was keenly missed by his wife and two sons Friday afternoon in the Lawrence Joel Memorial Coliseum, but there were lots of extended family members on hand to see James Blake's return to form.

The last time the Blakes gathered in this arena was in 2001, when James played and won his first-ever Davis Cup match against distinguished veteran Leander Paes of India. James was two years removed from Harvard, a skinny bundle of nerves who still wasn't completely convinced he was built for the long-haul trips required by professional tennis. 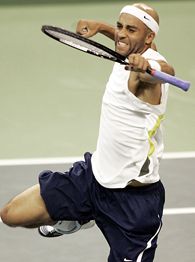 Friday, Blake dispatched fellow top-10 player Tommy Robredo of Spain in straight sets for a slump-breaking, streak-ending victory -- the first time in three tries that Blake had prevailed in the opening match of a Davis Cup weekend, and a much-needed confidence booster after a few pallid weeks on the ATP Tour. Blake's forehands were ropes, his backhands razors, his serve accurate. He unleashed a howl of competitive pleasure on a leaping volley winner.

His mother, Betty, watched from virtually the same place she did six years ago with her older son, Thomas, beside her. When the match was over, James dropped his racket and sank to his knees for a moment, exulting. He shook hands with his opponent and the chair umpire, then made a beeline for his mom. They embraced, and when they pulled away from each other, Betty Blake wiped tears from her eyes.

The 14,500 onlookers may have noticed that Blake seemed strikingly animated and focused in this match, exuding desire on every exchange, fist-pumping on good shots and shaking off errors like a wet dog in the hunt. He was drawing from a profound well. His father died three summers ago, but Joel Coliseum proved to be an especially evocative place for Blake.

"To know that my dad believed in me the way he did in 2001, that I would be on this team and I would be a part of it.  You know, I never believed it, and my mom and dad did," Blake said. "I'll never get that smile he had out of my memory when he was watching me play."

Blake seems forever trailed by some kind of drama, a player whose strokes follow his mindset rather than the other way around. On the U.S. Davis Cup team, he's part of a remarkable surrogate clan who exhibit sibling rivalry without acrimony.

Andy Roddick sets the tone by showing up every time competition is reconvened, and took that to a new extreme for these quarterfinals. He pulled up lame on Stadium Court at the Sony Ericsson Open last week and retired from the match, wanting to salvage some chance of competing here. His priority-setting was in direct contrast to Rafael Nadal's odd decision to declare that injury would keep him from playing for Spain even as he kept playing in Key Biscayne.

The Bryan twins have a bloodhound-like intensity in their level gaze -- they've been preparing for a Davis Cup trophy run since they were in grade school. Mardy Fish is Roddick's one-time housemate, captain Patrick McEnroe's one-time pick for the second singles player and Blake's close friend; he reported for duty as a practice partner and possible replacement for Roddick despite a still-sketchy shoulder, passing up the chance to spend time training on clay even though he's back in the top 25 and defending his title in Houston next week.

Sam Querrey answered McEnroe's call in case neither Roddick nor Fish could play. They all made room on the bench for Donald Young, whose wide eyes surely took a lot of family dynamics this week.

Roddick and Fish are Blake's brothers-in-arms. Meanwhile, his blood brother Thomas, with his height, distinctive dreadlocks and brilliant smile, couldn't take two steps on the concourse after the Robredo match without being stopped for a photo or a few words of congratulation. People understand that James' victories are a collective affair.

"It was tough on him, not doing well at Las Vegas and Indian Wells and Miami," Thomas said, noting that over the same stretch last year, James won Vegas and made the finals and quarters of the two Masters Series tournaments. "All Brian and I have been trying to do is keep him in good spirits."

Brian is Brian Barker, who goes way back in Blake's tennis genealogy. James was 11 when they started working together. Their 16-year relationship is unheard of in this business, where rapport tends to fray when on-court results suffer, or when a young athlete matures and becomes either willfully or inadvertently deaf to the same voice he's heard for so many years.

James stubbornly plugged his ears as a kid -- Barker almost dropped him after one particularly heated practice where James called the coach a jerk -- but absorbed more and more as he got older. The trust between player and coach is so complete that to this day, they have never had a formal contract.

"He's the rock, and he should get a lot more credit than he does," Betty Blake said of Barker, whom she also considers a close friend and confidant. "He knows everything about James, mentally and physically, and he always seems to be so right. He knows how to handle people -- he's sincere, and never confrontational. He's the one who got James to stop feeling the losses so much when he was a junior, to stop worrying about losses and rankings."

Barker speaks mildly, but he has a constant vigilance about him; his eyes sweep tennis courts, people and rooms like a searchlight. From the outside, it looks as if he was able to make the transition from coaching a boy to coaching a man by letting Blake grow into the space between them rather than trying to keep the relationship static.

After Blake lost in the second round in Key Biscayne, his sixth defeat in nine matches, he worked out hard for five days before he picked up a racket. Then he and Barker had a conversation that had more to do with psychology than forehands or passing shots -- a typical observant, respectful intervention by Barker.

"You don't have to lecture him," said Barker, who sat on the U.S. bench Friday. "It's not like I need to tell him what to do all the time. We discuss things and he usually comes up with the answer on his own."

Blake admits he finds it hard to explain why his coach's approach is still effective after all this time. Part of it seems obvious. Barker chooses his words carefully, and Blake has become a better listener than he was when he was a bratty, short-tempered kid. But that's harder than it sounds. Some mentors and pupils never reach that happy juncture.

"Sometimes we'll sit on the phone and talk for two hours, then there are times we'll go through two practices in a row where he doesn't say a word," Blake said. "Brian knows he's needed.  He doesn't just help me with tennis, he's made me a better person. Hearing the same voice, it's not always about the same thing.

"If he keeps me with a positive perspective and he's able to do it for this long, I don't see any reason why it's going to stop for the rest of my career."