ROME -- The Streak is alive. But only by the slimmest of margins.

Nineteen-year-old Spanish sensation Rafael Nadal continued to etch his name into tennis history Sunday at the storied Foro Italico, defeating world No. 1 Roger Federer, 6-7 (0), 7-6 (5), 6-4, 2-6, 7-6 (5) in five hours and five minutes to win his second consecutive Master Series Rome title. Nadal staved off two match points serving at 5-6 in the final set before going on to earn his 53rd consecutive win on clay, equaling the Open-era record set by Argentine great Guillermo Vilas in 1977. 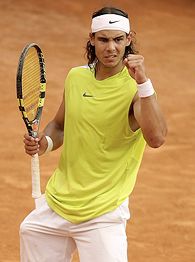 Nadal had earlier managed to dig his way out of a 1-4 hole in the final set against the man almost universally anointed as a solid bet to break Pete Sampras' all-time record of 14 Grand Slam singles titles. And after four hours and 50 minutes of play it looked like Vilas' record was safe, as Federer, 24, had two chances to clinch the win with Nadal serving to send the match into its third tiebreak.

"I think it's the first match point that cost me the match. I was in a good position, and I just tried to play solid and with a lot of spin to his backhand and long," Federer said. "I just couldn't get quite over it in time."

The consecutive forehand errors from the usually steady Swiss gave Nadal the reprieve he needed and he was able to hold serve and extend the match. In the breaker, Federer led 4-2 and 5-3 before Nadal ran off four consecutive points to win the match, the last when Federer sailed a forehand long on Nadal's first match point.

Vilas isn't the only former great who has to make room for the majestic Mallorcan in the record books, as Nadal won his 16th ATP Tour title while still a teen, which equals a record set by Sweden's Bjorn Borg. Nadal turns 20 in early June during the French Open.

Nadal, though, is either too humble (doubtful), too focused (possible) or blissfully ignorant (also possible) to spend much time waxing poetic about his relation to the game's greats.

Who will become Nadal's 54th victim in his quest to break Vilas' record? Germany's Tommy Haas and Nadal square off in the first round of the Hamburg Masters Series tournament that begins Monday.

He answered simply, "I'm very happy about that," when responding to a question about seeing his name mentioned along with those of Borg and Vilas.

For his part, Federer was a gracious runner-up, despite the tremendous disappointment of being so close to winning his sixth career clay-court title, an important tune-up for Roland Garros in two weeks. Nadal has now won the last four matches in the best rivalry in men's tennis since Sampras-Agassi.

As Andy Roddick quipped after losing his second consecutive Wimbledon final in 2005 to Federer, "I've got to start winning some of these to be able to call it a rivalry." The numbers speak of Nadal's current mastery of Federer. He now holds a commanding 5-1 head-to-head advantage in the series.

But the immensely talented Swiss may have broken through an important barrier by battling on his least-favorite surface for more than five hours and giving himself every reasonable chance of victory.

"It's good for me to play these tough matches and really see if I'm fit or not," he said. "We played almost four hours in Monte Carlo. Now we played more than five. I never had a problem, so that makes me confident looking ahead because that's exactly how I want to feel at the French."

Federer is 38-0 and has won all four of his finals in 2006 against opponents not named Nadal but is 0-3 this year against the Spaniard, dropping finals in Dubai, Monte Carlo and now in Rome.

Nadal's win, his second consecutive five-hour-plus victory in Rome (he beat Guillermo Coria in five sets last year for the title), pads his record in career ATP Tour finals to an amazing 16-2 and is his fourth title of 2006. He also won in Dubai, Monte Carlo and Barcelona and improves to 28-3 on the year.

The answer to the inevitable trivia question: Who was the last player to defeat Nadal on clay? It's Russia's Igor Andreev, who beat Nadal in the Valencia quarterfinals in April of last year.

Germany's Tommy Haas could become the answer to the next trivia question involving Nadal's streak: Who will become Nadal's 54th victim in his quest to break Vilas' record? The pair square off in the first round of the Hamburg Masters tournament that begins Monday.

"Fifty-three matches is a lot of matches [to win]," said an exhausted Nadal after his win. "Is a lot of titles consecutive on clay.

Whit Sheppard is a Paris-based sportswriter who writes frequently about tennis for ESPN.com. He can be e-mailed at lobsandvolleys@yahoo.com.