They're trying to hold a tennis tournament out in the land of pay-your-money-and-take-your-chances, but an ice dancing competition broke out instead.

The round robin fiasco at the Tennis Channel Open in Las Vegas came complete with the international intrigue and subjective rule interpretation we usually associate with Olympic judging.

"I would call it a first-class debacle," said commentator and Davis Cup captain Patrick McEnroe. "I was initially in favor of round robin to give these smaller events a shot in the arm. I'm not sure we should hit the panic button yet  but there has to be a way to set up the system so the integrity of the game isn't blatantly questioned." 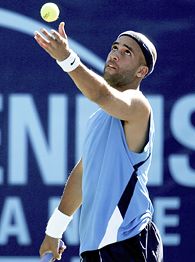 Give credit where credit is due. It was gutsy and doubtless difficult for ATP Chairman and President Etienne de Villiers to reconsider and ultimately reverse his late-night decision to send defending tournament champion James Blake through to the quarterfinals and send promising young Russian Evgeny Korolev home with an $11,000-plus consolation prize.

The mea culpa issued less than three hours before the quarterfinal was supposed to start included a well-deserved apology to the players involved. De Villiers' action stopped the bleeding and prevented the tournament results from being stained.

But this time, what went on in Vegas won't stay in Vegas. It's only the latest in a string of incidents and comments that have raised doubts about the controversial format, which will be reviewed by ATP board members when they meet at the Masters Series event in Miami later this month.

"I'm a proponent of round robin and of the ATP finding a solution to making it work, because I do think it's better for the fans," said commentator Jim Courier, whose Outback Champions Series for retired greats uses four-man round robin groups in competition. "But there have been some issues. I don't think it's worked, and right now it's causing more problems than it's solving. The ATP is going to need to investigate and tweak it."

Fellow distinguished retiree Todd Martin called the events in Las Vegas, "Probably a bad format, handcuffed by a rule that if it's not bad, is unfortunate, exacerbated by a bad decision and finally resolved by the right decision."

Two months into the round robin experiment -- implemented at five tournaments so far this year -- it's clear that ATP board members will have lots of material to consider in Miami. There's feedback from tournament directors and on-site ATP staff, media and fan surveys. There's also the following non-scientific data:

• Comments from the sport's reigning monarch, Roger Federer, openly rooting against the survival of round robin.

• A recent decision to pull the plug on round robin by the organizers of the Queen's Club tournament, a grass-court Wimbledon tuneup and arguably the most prominent of the dozen or so ATP events that had agreed to serve as guinea pigs.

• De Villiers' own remark that the round robin format's debut in Adelaide in January was "confusing." He was specifically referring to what is known in the jargon as the "32 hybrid" permutation of the format, where 16 players compete to qualify for eight spots in a 24-man main draw that's split into eight groups of three for round robin play. You follow?

• A rather gleeful ATP Web site blog entry from Swedish player Joachim Johansson at Adelaide: "Ah ha! I think I've found a way to win a round-robin tournament by losing four matches and winning just three!" He then spelled out his scheme.

• A not-exactly-ringing endorsement from Delray Beach champion Xavier Malisse. Malisse went into his last round-robin match knowing he had to win only one set to advance to the quarterfinals and said he didn't much like the way that made him feel.

• Scottish star Andy Murray's speculation, in comments to the British ACE Tennis Magazine, that round-robin could lead to match-fixing.

"I'm not sure we should hit the panic button yet  but there has to be a way to set up the system so the integrity of the game isn't blatantly questioned."
-- Patrick McEnroe

And now this. Get out your slide rules and read on, carefully:

That meant all three men finished tied with 1-1 records. Under the current rules, the first tiebreak is the number of completed matches. Del Potro's match against Blake doesn't count as a completed match, even though it does go down as a loss in the record book. So he was knocked out right there. (The retirement rule is designed to keep players from bowing out of matches when they know they're already through to the next round.)

Since only two men remained tied, the next tiebreak was not number of games won, as Blake apparently thought, but head-to-head results. Simple, right? Blake lost to Korolev. Ergo, he's out.

But it wasn't simple. de Villiers got involved, by phone, as did other ATP officials. We have to hope fatigue was a factor Thursday night when de Villiers issued a statement that included the following assertion:

"James Blake was awarded the group on the basis that the rules were not sufficiently explained. James was within just a few games of winning this match comfortably to advance. Juan Martin has stated that he would have completed the match had he been fully aware of the implications of his retirement."

Oh, really? Blake and Del Potro may have been misinformed about where their respective competitive paths could lead, but who's to say what would have happened if Del Potro had played another point? Blake could have sprained his ankle and hobbled off the court. Or, if Del Potro was really on the bubble about continuing to play, he might have hit a winner, caught his breath and rallied.

That's why guys play matches live instead of in fantasy leagues.

Last night, Blake was told he'd advance while Korolev was awarded a compromise sum that split the difference between what he would have won for getting to the quarters and the semis. Talk about mixed messages. Korolev was denied the chance to compete, but paid as if he deserved to. Thanks for playing our game, Mr. Relatively Unknown Russian.

The worst thing about all this was what it did to the players involved. Blake, one of the most upstanding and media-friendly players on the tour, was made to look as if he'd benefited from home-country, star-quality favoritism. He had to answer questions about his situation before he completely understood it.

"It was just somewhat strange because I thought I'd done my job," he told reporters on-site when he still thought he was going to the quarterfinals.

Only one other tournament in the United States has agreed to implement the round-robin experiment this season: the Campbell's Hall of Fame Tennis Championships on the venerable grass courts in Newport, R.I. in July. Five more in Europe are scheduled to use round robin.

On Friday, Newport tournament director Mark Stenning said he and his staff will be "taking a hard look at the decision we made."

Newport was receptive to round robin because of its rather unique track record, Stenning said. It's known as somewhat of a graveyard of favorites; no top-seeded player has won there for the last 27 years. Round robin would enable tournament organizers to get stars on center court at least twice.

"What has happened in Las Vegas causes us some concern  but I'm still intrigued by [round robin]," Stenning said.

Right now, the round robin feels like more of a run-around. Maybe it can be made more efficient and serve its original purpose, but even then, it should be recognized for what it is: a commercial convenience and a competitive contrivance.

Ticket-buying, tuned-in fans may be happy to see their favorite players guaranteed more matches, but they also need to be absolutely certain those matches are being contested on the up-and-up and that there are as few ways as possible to manipulate the system.

Otherwise, as they say in figure skating, you might finish your routine before the music ends.