PARIS -- When Fabrice Santoro lost the first three points of the fifth set's 30th game, the giddy crowd at Court Suzanne Lenglen cheered. For a fleeting moment, it seemed the match that wouldn't end might continue on into the unforeseeable future.

But five points later -- all of them won by Santoro -- the 31-year-old Frenchman was lying prone in the red dirt, savoring his exhausting victory over Arnaud Clement. A minute later, he unabashedly wept into his towel. 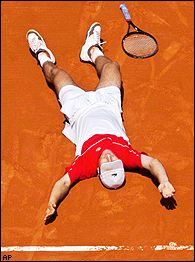 That's the longest Grand Slam match ever, going back to 1968, before which only sketchy records exist. It is also the longest match of any kind on record since 1968, eclipsing the legendary 1982 Davis Cup battle between John McEnroe and Mats Wilander that went 6 hours and 22 minutes.

Looking for some context? Santoro and Clement broke the existing French Open record by a tidy 62 minutes.

"It was a beautiful match," Santoro said. "It was a great match on a great court in Paris with probably the best crowd ever for us. But quite aside from the record, I'm happy to know that at the age I've reached I can still play tennis for six hours."

Santoro and Clement, who have been Davis Cup partners, are classic dirtballers. They hit all the shots, from all the angles. Santoro, particularly, likes to prolong rallies and frustrate opponents with a variety of moonballs.

This was Santoro's 15th French Open, one fewer than Andre Agassi, who has played the most of the 128 men entered.

With twilight descending on Monday night, the match was stopped at 5-all in the third set. 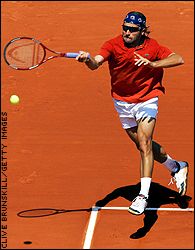 "This morning I string just two rackets," Santoro said. "I prepare one liter of drink for the match. I say, 'OK, maybe you going to play 10, 15 minutes, maybe half an hour.' And we played two hours.

"At the end, I was worrying about my rackets because the one I was using was the last one. I was a little nervous."

In the ultimate game, Santoro admitted he had difficulty breathing. After saving three match points, he drilled an ace and followed it with a backhand pass down the line.

Clement, who at 26 is five years younger than Santoro, did not offer a very firm handshake.

"Frankly, I don't give a damn," Clement said later. "What world record? Do I get a medal? If I'm not getting anything, frankly, I'm not interested. It doesn't count."

There is, as they say, no rest for the weary. Santoro, playing for the third consecutive day, meets Irakli Labadze of the Republic of Georgia in Wednesday's third match of Court Philippe Chatrier.

"I will have to react very rapidly," Santoro said. "Would I be at par with that tomorrow? It's difficult to say. I can't tell you now."