PARIS -- A growing serenity has settled on Jennifer Capriati in, this, her third or fourth tennis life. 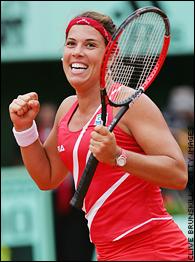 She had just launched into a bouncing, whirling victory celebration, thinking she had defeated her chief career nemesis, Serena Williams, when the chair umpire informed her it wasn't so. Pascal Maria overruled an out call and insisted that match point be played again.

Her father, Stefano, among those watching at Court Philippe Chatrier, was livid. His toxic diatribe caused his daughter to turn around.

"Calm down, Dad," she said, collecting herself to serve for the match a second time.

And when Williams' awkward forehand found the net, and Capriati was officially the winner, 6-3, 2-6, 6-3 on Tuesday, she did not twirl. She clenched her right fist and beamed an incandescent smile. She bussed Williams at net and, in the excitement, dropped her racket.

Later, Capriati said that the replay might have helped her.

"I was just so happy that we replayed the point, that I didn't lose the point," she said. "The ball was in, I guess. It was like a sign to me. Actually ... it just kind of helped. It really got the adrenaline going so much."

After eight consecutive losses to Williams, Capriati has now beaten her twice in 17 days. Capriati advances to Thursday's French Open semifinals and a match with Russian Anastasia Myskina, a surprise winner over Venus Williams, 6-3, 6-4.

It was the first time in their careers that both Williams sisters lost on the same day.

Serena was not impressed with the precedent.

"I don't really keep up with stats like that," she said.

Naturally, the Capriati-Williams match went three sets; 11 of their 15 matches have now gone the distance. Interestingly, Williams had won the last eight of those full-frame matches.

This time it was another bludgeon-fest, mostly devoid of science or strategy. In the third set, it was Capriati who was more aggressive and decisive. Williams had 45 unforced errors, compared to only 24 for Capriati.

"Finally, it's about time one of those went my way for once," she said.

When Capriati beat Williams in Rome -- 6-4, 6-4 in the semifinals -- Williams looked a little out of sorts. It was only her 14th match of the season after an eight-month sabbatical following knee surgery. But for Capriati, relatively ancient at 28, it was an uplifting victory. It reaffirmed her renewed faith in her game.

She finds herself in the fourth phase of a cathartic career. From 1990-93, as a precocious teenager, she was a quarterfinalist in nine of the 14 Grand Slams in which she played. Then, searching for herself from 1994-98, she lost her game, making no impression in the Grand Slams for those five years -- what should have been the prime of her career. Then she rallied, winning three Grand Slam titles in a period of two years, and won the hearts of tennis fans for her perseverance. And now? Capriati is in a sort of netherworld between the darkness and the light. Who besides Capriati would have thought coming in that she might contend for her fourth Grand Slam title?

Her body breaks down more often now. Last year she was troubled by shoulder, chest and hip injuries, and she missed this year's Australian Open with an aching back. A right thigh strain developed in her round-of-16 match, but it didn't seem to bother her against Williams.

Capriati hasn't won a Grand Slam championship since the 2002 Australian Open, but she remains a fierce contender. She has won just two titles in the past 29 months, but on 10 different occasions last year, she was within two points of winning her semifinal match with Justine Henin-Hardenne before falling to the eventual champion.

Since last month, Capriati has been working with Heinz Gunthardt, Steffi Graf's former coach, and he has had a positive influence on her game, both strategically and mentally. Capriati said Gunthardt hadn't radically retooled her game, just reinforced the things she's been doing all along.

That could be seen as she made fewer mistakes in the first set and, as a result, she won it, breaking Williams' serve three times in four chances. The second set went to Williams, who started finding the court with more regularity. And so, after two rain delays and 64 minutes on the court, they went to a third set.

On serve at 1-2, Williams grabbed her left buttock after a serve and seemed to stagger. Her serve, from that point on, never had much pace and her forehand was diminished. Capriati won the game when Williams pushed a weak forehand long. Capriati broke Williams again in the eighth game and served out the match, maintaining focus throughout the chaotic ending.

Afterward, Williams denied that she had an injury.

Williams, who lost for only the second time in 46 Grand Slam matches, will fall out of the top 10 for the first time since April 1999.

For Capriati, the omens are quite good.

In 2001, she beat Williams in the quarterfinals here in three sets and went on to win her French Open championship here. With Myskina's victory against Venus Williams and some dicey play in the other quarterfinal making Elena Dementieva the victor over French favorite Amelie Mauresmo, Capriati is suddenly favored to win here.

After defeating Williams, Capriati was asked what she was feeling.

"Satisfaction," she said, smiling. "It's just knowing that if you do work really hard and you want something bad enough and you do all the right things, that eventually they will come.

"And I guess this proves it to me because it came."