At 19 -- the age of a typical college sophomore -- Rafael Nadal already has produced tennis results that live among those of legends. The numbers, frankly, are difficult to assimilate.

Less than two weeks ago in Rome, the left-hander from the Spanish island of Majorca won his 53rd consecutive match on clay, equaling the Open era record of Guillermo Vilas. In defeating No. 1-ranked Roger Federer, Nadal won his 16th ATP title and equaled the all-time teenage record set by Bjorn Borg. Nadal has won 13 consecutive finals and has compiled a championship record of 16-2, yes, the best percentage of all time.

"Fifty-three matches is a lot of matches," Nadal said through a translator after winning in Rome. "When I look, [nine] is a lot of titles in clay. Is a lot, no? Before one tournament, I always think, 'This week, I'm going to lose.' 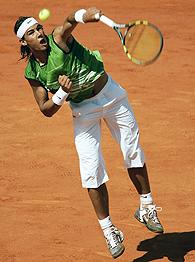 Nadal was asked what it felt like to have his name in the same conversation with Vilas and Borg.

During his clay streak, which dates back to April 2005, Nadal has beaten 39 different opponents. Guillermo Coria and Gaston Gaudio, superb clay-court specialists from Argentina, are both 0-3 in that span. And here's the interesting thing: so is a guy named Federer.

Federer, believed by a number of astute tennis observers to be the most gifted player ever, is 38-0 this year against the rest of the world's professional players. He is 0-3 against Nadal -- who was 11 years old when Federer played his first ATP match in 1998.

Federer has been ranked No. 1 in the world for 27 consecutive months. Nadal has been No. 2 since July. They led the ATP with 11 tournament victories apiece a year ago and are again ahead with four each this year. No else one is even close to their level. For the record, Nadal has won five of six matches against Federer, three of them on clay, which is Nadal's best surface and Federer's worst.

If Nadal and Federer do not reach the June 11 final at Roland Garros -- on the grand stage that is Court Philippe Chatrier -- the tennis world will be tremendously disappointed.

A year ago, Todd Martin was among those who predicted Nadal would win the French Open -- despite the fact that, for various reasons, he had never played the event. Martin, who retired from the ATP after last season and plays selected senior tournaments, sees no reason to change his pick.

"On every other surface, you look at Federer as being the favorite for the same reason Nadal is the favorite on dirt," Martin said recently. "There are fewer guys who can give Nadal a real run for his money on clay, so he has a much better chance to make the final than Federer."

Nadal always has been a prodigy in the making. He won his first ATP match at 15 and vaulted into the top 50 a year later. He grew up practicing with countryman Carlos Moya and first beat him at the age of 16.

He was the youngest player to break into the top five since Michael Chang, who at 17 years and 5 months, did it in summer 1989. Nadal was the second-youngest player to win a Masters Series event, missing Chang's record set in 1990 in Toronto by five months.

Nadal has amassed 16 ATP titles, and Federer had only won three championships before his 20th birthday. This suggests Nadal's game has room to grow. His comment -- "I need to improve a lot" -- is evidence that he believes this to be true, which is no small thing.

Federer, despite holding two match points, said he came away with positive thoughts.

"I would have liked to win, but I already knew after Monaco that I was extremely close," he said. "I think this is another step closer because I got even closer to the win. I improved a few things for this match. I'm on the right track."

Carillo isn't so sure.

"I believe Roger when he says he's getting a better sense of Nadal's game, but there's got to be a part of Roger that's worried," she said. "These are important losses, and they've come with him holding match points. He's had some problems closing -- there's no denying that. Clearly, that's something to watch for."

"From what I've seen, Federer has been able to change the momentum a bit at critical points, even though he lost a lot of chances," Martin said. "I think that he's more specific to how points are structured. The more he tries to bring Nadal on his terms, the better he'll be. He needs to be a little bit more aggressive."

In a span of seven years, from 1982 to 1989, Mats Wilander won three French Open titles and lost twice in the finals. In predicting a Nadal victory before last year's event, he added this caveat:

"If he wins it, you can repeat the same story every year for the next 10 years. Once you learn to win the French, you're always going to be a factor there, for sure."

"He won seven Grand Slams," Nadal said of Federer in Rome. "He's definitely, at the moment, better than any other player."

Federer, too, was asked to look forward to a Nadal-Federer final at Roland Garros after the final in Rome.

"Oh, I'm not sure if our thoughts are right there right now," said Federer, smiling. "We can practice together at the French Open -- every day if he wants."