PARIS -- Fourth-seeded Maria Sharapova came into the French Open with lingering questions about the status of a right ankle injury she sustained in practice in Monterey, Mexico in late April and, consequently, also about her match readiness. An MRI exam Friday, in Sharapova's words, showed a "bad" bone bruise with "a lot of fluid." She had not played a tour match since falling in the Nasdaq-100 Open final in Miami to Svetlana Kuznetsova on April 1.

What she won't exit her first-round match with is any question about her mettle under pressure. Sharapova showed plenty of it Sunday, saving three match points and climbing back from the brink of defeat to win 6-2, 5-7, 7-5 in two hours, 26 minutes against 97th-ranked American Mashona Washington.

The pair had played four times previously, with Washington winning once, on a hard court in New Haven, Conn., in 2004. Three of the four matches went the distance. 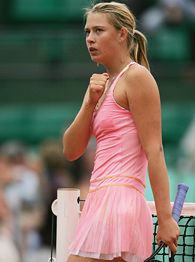 "I was calling 1-800-British-Airways in the third set," Sharapova said, eager to show a developing sense of gallows humor to go with her ample game.

"[But] I'm a competitor, I'm here and I'm going to give it all I have. If I can't handle the pain, there will be a time to stop. I'm just going to have to gut it out."

Clay is not the Russian's favorite surface, and her results at Roland Garros have lagged behind her performance at the three other majors. She did make the quarterfinals each of the past two years in Paris, but her power game is blunted on the terre battue and her best hopes of adding a second major title to her 2004 Wimbledon crown lie elsewhere.

Displaying no ill-effects from her lengthy layoff at the outset, Sharapova breezed through the first set in 28 minutes. After consolidating a service break to take a 3-1 lead in the second, she seemed to be on her way to a routine first-round win.

But Washington rebounded in the sixth game of the second set to convert on her third break-point chance with a two-handed backhand winner down the line to even at 3-all. Then, leading 6-5, she broke again to even the match at a set apiece.

A trainer re-taped Sharapova's balky ankle before the final set, but it was of little help, as she faced a match point on her serve down 2-5 and then two more on Washington's serve in the ensuing game. Somehow the Russian held her nerve and reeled off five consecutive games to earn an anything-but-routine victory.

The health issues weren't confined to the lithe, 19-year-old Russian. Washington woke up with a stiff neck and wasn't even sure she could play, before coming within a single point of victory on three occasions.

"I think I played well, but I just wasn't able to get the last point I needed to close out the match," Washington said. "I could have maybe been a little more aggressive but she had me on my heels."

Washington was more notable coming into the tournament for being one of the three women in the main draw with older brothers who've reached Grand Slam finals. The others are No. 14 Dinara Safina, sister of two-time Slam winner Marat Safin, who advanced in straight sets today over Vera Zvonareva, and Michaella Krajicek, whose brother Richard won Wimbledon in 1996, defeating Washington's brother MaliVai in the final.

Ironically, it was Malivai Washington who benefited from a momentous final-set collapse in the semifinals by fellow American Todd Martin to reach the last two at Wimbledon that year.

Today the Washingtons gave one back, the sort of loss that's likely to linger a while. Chances to bounce a fourth seed from the first round of a Grand Slam rarely come around, and the 29-year-old Washington experienced a misfire of the sort that can send an emotionally fragile player into a lengthy tailspin.

That possibility wasn't on her mind when she showed up for her post-match interview with a trace of a smile and a surprisingly healthy amount of light in her eyes.

"It was pretty disheartening five minutes after the match in the locker room but it's in the past now," she explained. "I can't do anything about it."

Sharapova advances to a second-round match against Czech Iveta Benesova, who won her first match in more than two months, 7-5, 6-3 over France's Pauline Parmentier.

Whit Sheppard is a Paris-based sportswriter who is covering the French Open and Wimbledon for ESPN.com. He can be e-mailed at lobsandvolleys@yahoo.com.