PARIS -- Between French Opens, Roger Federer's reign as the world's best tennis player has been complete.

The Swiss champion won at Wimbledon in 2005 and then the U.S. Open, and again in Melbourne in January -- three Grand Slam singles titles out of three. The No. 1-ranked player was poised to make history on Sunday, attempting to become only the third man to win four consecutive Grand Slams.

When Federer, at his liquid best, took the first set of the 105th French championship by the score of 6-1, history seemed to be beckoning. 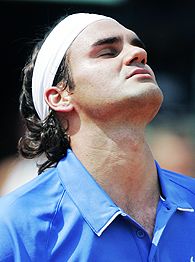 But at Roland Garros, where the clay dulls his array of gorgeous angles and trajectories, Federer has this little problem. His name is Rafael Nadal, and he has utterly destroyed Federer in the last two championships here. There is a suspicion that as long as the 20-year-old Spaniard is around, Federer may never win here, putting him in the good company of Pete Sampras, Boris Becker, Jimmy Connors and Stefan Edberg.

Nadal, after losing that first set, blinded Federer with a savage barrage of shots and won his second consecutive French Open title, 1-6, 6-1, 6-4, 7-6 (4). Technically, he is the world's No. 2-ranked player, but head-to-head he has now beaten Federer six times in seven matches.

Nadal, who missed time earlier this year with a foot injury, said the second title meant more to him.

"In December and January, I had a difficult injury," he said. "When you have a problem, and you don't know exactly if you'll be at the same level as before, you value it a little bit more."

Federer, for the record, was Nadal's 60th consecutive victim on clay, a mark that seemingly has no end in sight. And so, Federer's own streak -- he had won 27 consecutive Grand Slam matches, two shy of Rod Laver's Open Era record -- is over. Further confirming Nadal's mastery, it was the first time in eight Grand Slam finals that Federer has lost.

"I have no other choice but to accept the fact," a glum Federer said after the match. "I tried. I can't do more than that. Both of us having this real unique opportunity that we haven't seen in such a long time in tennis. Obviously, it's a pity, but [life] goes on, right?