No player, male or female, was more dominant on clay than Chris Evert. She went 197-1 on the surface from 1973-81 and captured seven total crowns at Roland Garros despite skipping the tournament three years in a row at the height of her powers. Her battles with Martina Navratilova there were among the most memorable slugfests in their rivalry. On the eve of the French Open, Evert tells ESPN.com where she is on the Roger-Rafa spectrum; looks back on the controversial open letter to Serena Williams she penned for Tennis Magazine last year; and talks about her passion for teaching at the Evert Academy.

ESPN.com: You're one of the few who can relate to putting together a streak like Rafael Nadal's. Do you think it's better or worse for him to have it broken right before the French?

Chris Evert: The focus isn't on you as intensely. It gives you some breathing room. It's better for him that it came at that time, the tournament before. He can take a deep breath and focus, say 'I lost what I was doing, let's get back to that.' On Federer's side of the court, he's got to feel like, 'I found a way to win. I'm stepping in, I'm taking balls early, I'm hitting shots on the rise, I'm not playing Nadal's game.'

Q: There's been a lot of talk about Nadal's improvement on hard court and grass, but have you seen an evolution in his clay-court game?

Evert: He's so comfortable and so at ease. Half the battle is moving and sliding. The other half is, anyone who gets on the other side of the net from him is going to have that panic and fear that the guy is going to throw up those topspin shots with power, and he's a great receiver who runs down balls that would be winners for anyone else. His confidence has gotten better and better. I don't think it's so much that his clay-court game has evolved as that he started out being a great clay-court player. If he's down 4-2, he's still going to win the set. Winning is a habit for him.

Q: How much of the Federer-Nadal rivalry is about the contrast in their images as opposed to their playing styles?

ESPN.com: Sometimes it reminds me of people at a political rally, carrying around pictures of their candidates.

Evert: [Laughs] As long as it doesn't get violent. I remember when Martina and I would go to L.A. in the early years when she was a bully, and everybody felt sorry for me. She'd say, 'You have so many more fans,' and I'd say, 'Your fans are so much more vocal.' She'd do something and you'd hear this big outburst from one corner of the court. With Federer and Nadal, it's like a soccer match. Everybody's so very adamant about supporting their man. It adds juice to the match.

Q: Moving on to the women, there's a sense that this is a pretty weak field at the moment, except for Justine Henin and Serena Williams and maybe Jelena Jankovic, who's made a big move to No. 4 recently. A lot of other players are out or coming off injuries.

Evert: It's hard to put your finger on. They keep getting hurt. We don't have a consistent group of four or five women competing week in and week out.

Q: Do you see Henin repeating?

Evert: She's head and shoulders above anyone else. Very dedicated, mentally tough, committed. She doesn't have a lot of other peripheral things now, so she's focused. It's probably the Grand Slam she's most comfortable with. She's got to be considered the top favorite.

But I still feel in the back of my mind that when Serena is committed and in shape, she's the best player. She said after the Australian Open that she was focused on the French and wanted to win the French. The only thing is, she keeps bringing up this 'I'm going to show everybody' thing because people were talking about her last year when she wasn't playing. She's a great player when she's committed to the game, and she's shown that. The whole world saw her talent and personality. All they were saying is, 'We believe in you and we believe in your game.' She has taken that as a negative. I still hear quotes about what I wrote in my letter in Tennis Magazine.

Q: Did you ever talk to her about it? Do you regret writing it?

Evert: I've never talked to her about it. Look, when I write for Tennis Magazine, I may be a rookie, but I'm a journalist. I'm absolutely not sorry I wrote it. I did not take any potshots at her. All I said was, 'We miss you, come back. In 10 years, you might wish you had come back.' And she did get the urge to come back. Anyone who's ever commented on Serena has done it out of frustration, hoping she could benefit from it and would benefit from it, trying to get her to think. Now she's trying to get back at people. It's like having been in a bad relationship. You have to move on. Everyone's made their point. Her critics have made their point. She's made her point. Now let's get on with playing some beautiful tennis and winning titles and celebrating with her family.

Q: Is the Serena-Justine rivalry as compelling as Federer-Nadal?

Evert: That's another beautiful rivalry, two opposites in personality, style of play and fan base.

ESPN.com: It would be hard to find two great players with more different physiques. 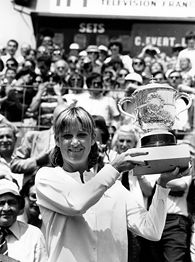 Evert: I've got to hand it to Justine. She doesn't get enough credit for that. In the era after mine, when you had Gabriela Sabatini, Steffi Graf, Monica Seles, Lindsay Davenport and Arantxa Sanchez. I thought the day of the 5-foot-4, 5-foot-5 player was over, it was never going to happen again. Then along comes Justine.

Q: Why didn't you play the French those three years from '76 through '78, right in the middle of your streak?

Evert: Don't think I don't think about that now. I was playing World Team Tennis. Grand Slams weren't as important then. Nobody was counting titles like they are now. Same with the Australian. I didn't play that many, because it meant going down there in December, and it was just out of the question that I would leave my family during Christmas time.

Q: With your career success on clay, it must be painful to see how much American players struggle on it now.

Evert: It's logical. Americans are brought up on hard courts because the U.S. Open is played on hard court. The Europeans are brought up on clay. It depends on what surface your country's championships are played on. I do think that one of the draws for the USTA, in our talks was that half our courts are clay. For young players, number one, that helps develop your game on clay, and number two, it isn't as hard on your body. It's too late, maybe, but I definitely think the intent is to raise and groom players on clay. (editor's note: the Evert Academy in Boca Raton, Fla., run by Chris and her brother John, will be the site of the U.S. Tennis Association's residential development program starting this fall)

Q: I'm curious about your philosophy as you enter this partnership with the USTA. You and your brother grew up playing tennis in a family-oriented atmosphere, on public courts. A lot of people think of academies as the antithesis of family. How do you bring those two concepts together?

In a sense, our summers growing up at Holiday Park (in Fort Lauderdale) were like an academy. We played all day.

Our mission statement says we look at the whole child. We don't just think of them as tennis machines, like, 'Are they going to be good and make us look good?' We're not telling parents, 'We'll take care of them and adios, amigo.' Balance is a big word. We don't want to be a tennis factory, but we want to maximize each child's potential. Susie X might want to go to college and Susie Y might want to go on to the tour. That means hard work, but also nurturing from the coaches. If you're a kid, you need support and backing from your family. It's not just us and the child, it's us and the family.

Since I stopped playing, my children have been the most important thing in my life, but the academy has brought me a lot of pleasure and passion. It's seven minutes from my house, and I feel like it's home, not work.

Bonnie DeSimone is a freelancer who is covering the French Open for ESPN.com.