Earlier on Thursday, he had won the first two sets against Lleyton Hewitt, then imploded and, ultimately, lost a heart-wrenching five-set match. Was he frustrated? Gaudio paused as he considered the question and a small smile actually crept across his face.

"I am used to it," he said softly, with resignation.

What happens when you've been to the very top, when you've walked where few have walked before? Astronauts who have been to the moon have reported that nothing in their life compares to the experience. Nothing on earth holds that kind of celestial thrill.

And so it is with tennis players. Once you've been to the summit, there's nowhere to go  but down. 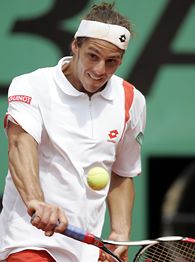 Gaudio and Hewitt know that peculiar thrill of victory. Gaudio won the 2004 French Open -- the ultimate victory for a clay-court player from Argentina. Hewitt was the 2001 U.S. Open champion and won the 2002 Wimbledon title. The Australian finished both years as the No. 1-ranked player in the world, but that was BF -- Before Federer.

Today, several years after their greatest accomplishments, Gaudio and Hewitt are no longer at the top of their games. At the age of 28, Gaudio is ranked No. 72 among ATP players and has won only six matches in 12 tournaments this year. Hewitt, 26, is ranked No. 16.

How do you find the fire to again reach the top?

On Day 5 of the French Open, two former Grand Slam champions faced off for the first time in this tournament. Three years ago they met in the quarterfinals, with Gaudio winning in straight sets. Between them, they had advanced to at least the third round in 11 consecutive tour appearances.

This time, Gaudio did not. After three hours and 28 minutes, a grim, grinding Hewitt prevailed in their second-round match 4-6, 3-6, 6-2, 6-4, 6-2. It ended with a swinging uppercut fist pump from Hewitt, while Gaudio trudged slowly to the net, his eyes downcast.

There are others in this field at Roland Garros who know the exhilaration of walking on a rarely touched surface. Carlo Moya, the 1998 champion here, finished 1998, 2002 and 2004 as the No. 5-ranked man. Now 30 and ranked No. 26, he finds himself in the third round after defeating Florent Serra 6-4, 6-2, 6-4. Spanish compatriot Juan Carlos Ferrero won the French Open in 2003 and saw his ranking soar to No. 3. Today, ranked No. 20, he joins Moya in the third round.

Marat Safin, the 27-year-old Russian, is a two-time Grand Slam winner. He has finished seasons ranked No. 2, No. 3 and No. 4. But in his 10th season as a regular on the ATP, he has struggled with injuries (wrist and knee) and fallen to No. 25. His candor, while refreshing, was sometimes difficult to listen to after he lost to Janko Tipsarevic on Wednesday. 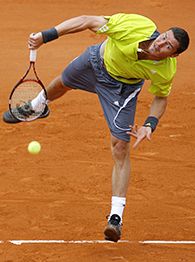 One overreaching reporter saw parallels between Safin and Hamlet.

"Well, I'm 27 years old, and I'm already downhill on my career," said Safin, taking exception. "So it's not really a question of 'To be, or not to be.'

"This kind of question will be at age of 22, without winning a Grand Slam, and being somewhere up close but never actually achieve anything, like [Marcelo] Rios, for example. That's a question for him."

Later, Safin did address his mortality.

"I'm not really into being [ranked] around 50 in the world," he said. "It doesn't really motivate me to play good tennis and travel around the year. I make one semifinal somewhere in a small tournament [Las Vegas], and that's it. It doesn't give me enough motivation to continue.

"Of course I want to play tennis, and it would be a sad situation to leave with being a struggling player. I really hope that that can change and play another three, four years."

Hewitt, too, has been dogged by injuries. You name it (ankle, back, groin), he's had it. He got off to a rough start this year, winning only five of nine matches, but has worked himself back into condition. He won in Las Vegas in early March and reached the semifinals two weeks ago in Hamburg. Hewitt split the first two sets with Rafael Nadal and lost 5-7 in the third.

"He's a fighter," said his former coach, Darren Cahill. "Because he hits the ball so flat, he has to work a lot harder on this surface than a lot of other guys. But hard work is something he's always been willing to do."

Gaudio is the anti-Hewitt, laid-back and almost aloof. Nothing in his career probably ever will eclipse his victory over Guillermo Coria here in the 2004 final. He saved two match points and hoisted the trophy with tears in his eyes. Has the win cast a vast shadow on everything he has achieved since?

"Of course," said Gaudio, who has lost 12 of 18 matches this year. "Everybody knows this year is the worst of my career. But I can't turn [back], you know?"