PARIS -- With all eyes on the grand dames of this French Open -- at 25, Serena Williams and Justine Henin were the oldest women left in the draw -- a quiet revolution continued on Tuesday.

While Henin advanced to the semifinals, she is joined there by three young and charismatic stars. Ana Ivanovic, 19, defeated Svetlana Kuznetsova 6-0, 3-6, 6-1 to advance to a match with 20-year-old Maria Sharapova, a 6-3, 6-4 winner over Anna Chakvetadze, another 20-year-old Russian.

A year ago, Serbians Jankovic and Ivanovic were ranked No. 32 and No. 21. Today, they are No. 5 and No. 7, respectively. It will be the first Grand Slam singles semifinal for Ivanovic and only the second for Jankovic, who reached the U.S. Open semis last year, only to lose to Henin -- her opponent on Thursday.

"Wherever you go, it's just Serbians all over the place, winning all these matches," said Jankovic, laughing. "It's just incredible. I'm just proud of that and just, hopefully, we can keep going." 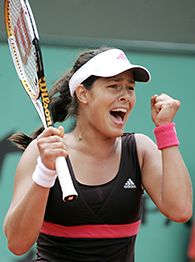 Seven of the top eight women's seeds advanced to the quarterfinals, and the one interloper was No. 9 Chakvetadze, who supplanted No. 5 Amelie Mauresmo -- hardly a huge upset. This produced the usual grumbling that women's tennis is too predictable.

But, on second look, the four quarterfinal matches all seemed too close to call with certainty, a refreshing development.

"This is as good as it gets," Fernandez said. "You can't have closer matches. Everyone has always criticized women's tennis for lopsided matches. Well, they're not lopsided any more.

"These youngsters have stepped up. They're playing with confidence and their rankings show it. They've all had their breakthroughs. This is a huge day toward making that next breakthrough."

As it turned out, Ivanovic took the biggest step forward.

She had been the least impressive entering the quarterfinals, defeating Sofia Arvidsson, Sania Mirza, qualifier Ioana Raluca Olaru and Anabel Medina Garrigues to get there. Still, she had beaten Kuznetsova -- the 2004 U.S. Open champion -- three weeks ago in the Berlin final.

That match ended in a third set tiebreaker, but this one almost bordered on psychotic. Ivanovic won the first set at love, dropped the second set and then won the third 6-1. She is a much better player, she said, than the 17-year-old who advanced to the quarters in here first appearance at Roland Garros.

"My fitness [is] a big difference," she said. "And also, a lot of experience because I played so many matches since then. That experience helped me a lot and made me more calm today."

Jankovic continues to be the most successful player on the women's side this year. She has now won 44 of 54 matches. Her speed and relentless retrieving more than neutralized Vaidisova's bigger serve and ground strokes.