PARIS -- An hour after clutching her fourth French Open trophy, Justine Henin cradled other precious cargo in her arms: her 6-week-old niece.

Talking and laughing with friends and relatives in a lounge just
off center court, Henin slowly rocked her brother's baby, then
gently kissed her head. As much as a sixth Grand Slam title meant
to the top-ranked Belgian, this scene was worth far more.

For Henin, life off the court has long presented far more
problems than life on it. So after overwhelming No. 7 Ana Ivanovic
of Serbia 6-1, 6-2 Saturday for a third consecutive French Open
championship, Henin was thrilled to be able to sip champagne
alongside family members with whom she only recently re-established
contact. 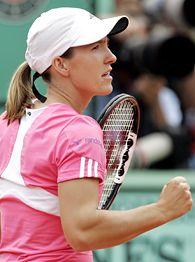 "It's been a huge step in my life in the last few months. And I
was glad I could give them this victory, because everyone suffered
a lot," said Henin, who went about seven years without speaking to
her father or three siblings. "Today, finally, we are united in
this joy, and we can share this moment."

This was Henin's fifth consecutive final at a major she entered;
she skipped the Australian Open in January while working through
personal issues, including separating from her husband.

Back in the Grand Slam spotlight, back at her favorite
tournament, Henin was as good as ever at Roland Garros, where she's
won 35 consecutive sets.

Henin is the first person since Monica Seles in 1990-92 to win
three French Opens in a row. In Sunday's men's final, Roger Federer
will be trying to win his fourth consecutive Grand Slam title --
something no man has done in nearly 40 years -- while Rafael Nadal
bids for a third straight French Open title.

Despite all of her experience, Henin began slowly Saturday,
double-faulting to get broken in the first game, then falling
behind 40-love in the second.

The 19-year-old Ivanovic was the one in her first Grand Slam
final, but it was Henin who appeared nervous at the outset, perhaps
burdened by wanting to win so badly with her younger sister and two
older brothers in the stands. They traveled from Belgium to root
for her at the 1999 French Open, before their falling-out -- then
didn't attend another match of hers until last week.

"I am looking at her and see that this year she is laughing,
smiling, and taking pleasure in what she does," said her oldest
brother, David. "I used to see her on TV and she did not always
look too happy."