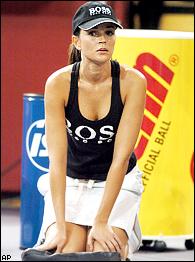 Women in black tops and white, knee-length skirts chased errant
shots during Costa's 6-2, 5-7, 7-5 victory over Irakli Labadze.
Reportedly paid $1,100 for the week, the women were greeted by
cheers and whistles at the Madrid Rockodrome indoor court.
The women are appearing in one televised match each day during
the tournament.

"They did it very well. I didn't notice any difference," said Costa, who won his first match in six tournaments. "It's entertaining, and I like the idea that the tournament
should do this."


The 19 to 28-year-olds were drafted in as ball girls to
replace the young fans who usually run around picking up stray
balls and handing towels to players. Despite winning applause from spectators, they had a
mixed reception off-court.

Left-wing Madrid politician Ines Sabanes said employing the
women, who wear skirts and tight tops emblazoned with the name
of a sponsor, was sexist and frivolous.

Parents of the teenagers they ousted felt it was a heartless
move. "This kills the children's dreams of sharing a court with
their idols," said a 50-year-old mother.

Some fans fretted about the models' lack of experience --
most knew little about tennis before signing up for the job
although they went through two weeks of theory and practical
lessons to prepare for the high profile matches.

"I started from zero, apart from a bit of messing around on
the beach," said Mercedes Munoz, 26, at a pre-game makeup
session on Monday.

The ball girls they replaced, dressed in less glamorous
black shorts and shirts, were unconvinced despite the training.

"We think its very, very bad because in a game of tennis
the centre of attention should be the player. It's sport, not a
catwalk," said one 14-year-old who did not want to be named.

Only the players, more focused on winning than on
ball-girls' looks, seem to have shrugged off the controversy.

"When you're on the court, you only look at the ball and
your coach -- as long as its the same ball it doesn't matter
(who throws it)," Corretja said.

Costa now faces top-seeded Tim Henman in the second round
Wednesday.
"It'll be a very difficult match," said Costa, the 2002 French Open
champion. "We've played each other a lot. I've beat him; he's beat
me. But he's in better form than I am. I'll go out with nothing to
lose and under no pressure."
Also Monday, Corretja beat David Ferrer 7-5, 6-1, and Horna
defeated Hicham Arazi 6-4, 7-5. Corretja next meets 16th-seeded
Paradorn Srichaphan, while Horna must play defending champion Juan
Carlos Ferrero.
In other action, Olympic silver medalist Mardy Fish came back to
beat Wimbledon semifinalist Mario Ancic 0-6, 6-4, 6-4, Robby
Ginepri got past Juan Luis Tati Rascon 6-1, 6-4, Stefan Koubek beat
Sjeng Schalken 6-4, 6-4, Robin Soderling eliminated Florian Mayer
6-3, 7-6 (2), and Antony Dupuis downed Agustin Calleri 6-4, 6-4.
The top three men in the rankings -- Roger Federer, Andy Roddick
and Lleyton Hewitt -- withdrew, but major champions Andre Agassi and
Marat Safin are entered.
On Tuesday, Agassi will play Max Mirnyi, a 6-3, 7-6 (3) winner
against David Sanchez.
Corretja blamed the withdrawals on the sport's hectic schedule.
"It's a shame that four or five of the best players are not
here," he said. "My experience tells me that it's hard to keep up
with the rhythm in the world of tennis. It's not human. You have to
stop and rest.
"You have to be prepared to win the tournament, and if you're
not, it's better not to go," he added.