Jim Courier loved baseball. As a teen, though, he took his
ballcap and slugging skills to the baseline -- and now he's headed
to the International Tennis Hall of Fame. 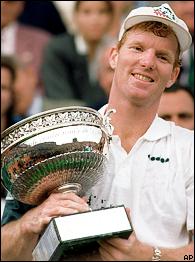 Courier joined Pete Sampras, Andre Agassi and Michael Chang in
dominating a decade of the men's game, and he was the first of that
group to win two Grand Slam tournaments and the first to be ranked
No. 1. Courier also was the first of those stars to retire,
quitting tournament tennis in 2000, at age 29.

"I know I left the game at the right time for me. Physically,
emotionally, I was just spent," Courier said in a telephone
interview from California on Tuesday, when the hall announced that
he, major champions Yannick Noah and Jana Novotna and tour
administrator Butch Buchholz will be inducted July 9 in Providence, R.I.

"There's not room on our tour, on the tennis tour, for someone
who's not passionate about it, someone who's just punching the
clock. I felt that I was dangerously close to going through the
motions."

He might have come close to dropping tennis altogether as a kid,
when he also was honing his diamond skills. Courier's father and
brother played college baseball, and he dabbled in that sport until
deciding to concentrate on tennis at 13.

"It's in our blood. We're genetically encoded to play baseball,
we Couriers. That probably explains why my backhand looks the way
it does. It's probably a combination of a baseball swing and a
tennis swing."

With his two-fisted ball-bludgeoning, and his clay-specked white
hat, Courier had a distinctively American look on court. He ingratiated himself to the fans at Roland Garros by speaking French during the trophy ceremony after his second title there.

"When I won the first French Open, I didn't have a lot of
vocabulary with regard to the French language. So I set a goal to
win another French title somewhere in my career and learn enough
French to give my speech," he said Tuesday.

"Well, I won again the next year, and fortunately I scrambled
together just enough words to convince people that I could speak
French a little bit. People still remember that moment, and that
gives me a nice, warm feeling."

Since walking away from competition, Courier has worked as a TV
analyst and was a coach for the U.S. Davis Cup team. He said
Tuesday that he's not interested in being a personal coach for
individual players, but that he would like to become Davis Cup
captain when Patrick McEnroe leaves.

"There will be a time when that job is available, and I will
put my hand in the air," Courier said.

In 1983, Noah became the first Frenchman to win at Roland Garros
in 37 years. Ranked as high as No. 3, he finished with 23 titles in
singles and 16 in doubles, including the 1984 French Open with
Henri Leconte. He captained France to the 1991 and '96 Davis Cup
titles, and led the country to its first Fed Cup championship in '97.

Most famously, she sobbed on the shoulder of the Duchess of Kent
during the trophy ceremony after losing the 1993 final at the All
England Club to Steffi Graf. Novotna was one point from a 5-1 lead
in the last set when she double-faulted, then lost five straight
games and the match.