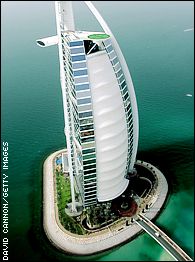 That's how Andre Agassi and Roger Federer spent their afternoon Tuesday in Dubai, United Arab Emirates. The Burj Al Arab luxury hotel converted its helipad to a grass tennis court, and Federer and Agassi checked it for a "friendly hit."

"This was an absolutely amazing experience," Agassi told ATPtennis.com. "When you first get over how high you are and start playing, it's an absolute joy and it was a great time. I had no issues with the height as long as I didn't have to bungee jump off the side."

The 4,467-square-foot court sits near the top of the 1,053 foot tower that was built on a man-made island in the Arab Gulf. It took almost three years to build the island before work even began on the sail-shaped building, which was designed by architect Thomas Wills Wright, according to the hotel's Web site.

"The view is absolutely amazing here, and it was very different when I was asked to do this as I didn't know what to expect," Federer told ATPtennis.com. "I have been in Dubai many times and have stayed at Burj Al Arab before, but this was an absolute treat. To play tennis with Andre on top of such an amazing hotel and overlooking the whole of Dubai was absolutely spectacular."

Agassi, who is making his first appearance in the Dubai Duty Free Men's Open, plays Feliciano Lopez in the second round on Wednesday. Defending champion Federer faces Czech Ivo Minar to determine who will take on Juan Carlos Ferrero in the second round.