When Andre Agassi takes the court on Tuesday for his second-round match in the Mercedes-Benz Cup in Los Angeles, astute tennis fans will notice a change -- his clothes. 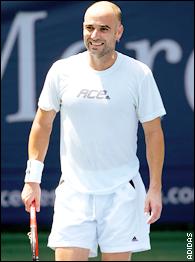 Adidas announced on Monday that the company has signed the 35-year-old to a long-term partnership. Agassi will wear adidas footwear and apparel, but much of the agreement includes giving products and financial support to the tennis star's foundation.

"I'm excited about my new partnership with adidas," Agassi said in a statement. "Our relationship not only means that I will be working with one of the best brands in the world but, more importantly, also provides support to my foundation."

The Agassi Foundation was founded in 1994 and has since become one of the most active philanthropic organizations run by an athlete. From 1996-2003, public records show that the foundation contributed $29 million to causes related to underprivileged and abused children.

"If there's a heaven, this guy is going there," said Martyn Brewer, director of sports marketing for adidas America. "His commitment to kids is beyond compare."

The move from Nike to adidas might befuddle some tennis fans. Perhaps no other athlete, aside from Michael Jordan and Tiger Woods, is more identified with the Swoosh.

"Andre Agassi and Nike is as indelible of a connection that a brand and athlete can have," said Paul Swangard, managing director of the University of Oregon's Warsaw Sports Marketing Center. "It's going to be a challenge to undo that."

"It's great that he will be wearing adidas for some upcoming tournaments," Brewer said. "But this deal is more about using tennis as a vehicle to help children instead of Andre being the face of adidas."

The following year, as he surpassed $1 million in career earnings, Nike cashed in on headbands and bleached denim shorts at retail thanks to Agassi. He loved his neon pink so much that he refused to play at Wimbledon because of the All England Club's all-white dress code.

"Nike has enjoyed a long and successful relationship with Andre Agassi, one of the greatest players in the sport," said Nike spokesperson Dean Stoyer.

Agassi's tagline became "Image is Everything," thanks to a Canon commercial that he starred in that used the line. Years later, he said he regretted that it became his unofficial motto.

"I think that phrase itself wasn't reflective of who I was, even then," Agassi told the Cincinnati Enquirer in 2000. "It's sad to say, even in saying the line and filming the campaign, it never quite occurred to me what was being said or expressed. Some lessons you have to learn a tough way. That certainly was one of them."

Throughout the course of his career, Agassi has won 59 career titles, including eight Grand Slam crowns. He won the Australian Open in 2003, but he has only won two titles since then.

According to Forbes Magazine, Agassi was due about $40 million in Nike stock at the conclusion of his contract, which expired in January. A Nike source indicated that Agassi was paid in full as specified by his contract, but there was no stock payment involved. Agassi's agent, Perry Rogers, did not return a call seeking comment.

Even though she has been retired since August 1999, adidas still has Steffi Graf, whom Agassi married in 2001, under contract. Graf and Agassi have recently starred in commercials for Genworth Financial. The most recent spot features an actor playing their 3-year-old son taking on pro Taylor Dent. Brewer said that adidas might team the two in a commercial, though it's too early too tell.

After pulling out of Wimbledon because of a back injury, Agassi said he would talk about retirement at the end of the season. Despite the likelihood that he will end his tennis career in the near future, Agassi still has active endorsement deals. He has nine years left on a deal with 24-Hour Fitness and a lifetime contract with Head rackets.

Darren Rovell, who covers sports business for ESPN.com, can be reached at Darren.rovell@espn3.com. Check out his Sports Business Blog.