NEW HAVEN, Conn. -- In his mind, James Blake has been back
all summer. His fluke neck injury, his rare illness and the
emotional loss of his father were behind him, and the one-time top
20 player said he had a new perspective on the tennis court. 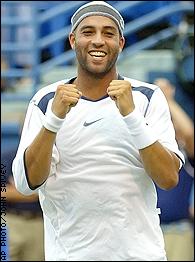 On Sunday, he proved it, beating Feliciano Lopez 3-6, 7-5, 6-1
to complete an improbable run from unseeded challenger to champion
of the Pilot Pen tournament in front of a hometown crowd.
It was the first win in three years for Blake, who was raised in
nearby Fairfield and was the tournament's biggest draw. It felt
even better, he said, that he had to come from behind to win,
readjusting his strategy to account for Lopez's 130 mph serves.
"At the beginning of the year, I probably wouldn't have won a
match like this," Blake said.
Last year, he slipped and broke his neck on a practice court in
Rome. After that injury, he contracted Zoster, an illness that
affected his sight and hearing and temporarily paralyzed part of
his face. His father died of cancer that summer.
Just a few months ago, he was out of the top 200.
"For a while, you never know if you're going to be back to
where you were before you got injured," he said.
But he played well in Washington D.C. this month, losing in the
finals to Andy Roddick. He entered the Pilot Pen ranked No. 67 in
the world and was more relaxed than he had been in years.
"It helped with my perspective, with knowing that every match
isn't the end of the world," Blake said.
New Haven provided the perfect setting for Blake's comeback win.
He slept in his own bed, ate meals with family and friends and
enjoyed ovations every time he stepped on court.
"This is a dream come true," he told the 6,100 fans after his
win. "I had a couple three-setters and maybe my legs would have
gone, but you guys were my legs."
Lopez said he had never played against an American who had the
crowd so solidly behind him. The raucous fans stuck out an hourlong
rain delay, screaming Blake's name and occasionally heckling Lopez
with chants of "no mas" -- "no more" in Spanish.
"The are his friends," Lopez said. "They want him to win."
Blake came out sluggish in the first set and Lopez capitalized,
playing to Blake's backhand and winning 11 of the set's final 12
points.
Blake battled back after the rain delay, however, winning a
close second set and using a powerful forehand to dominate the
third.
"It was a completely different match," Lopez said. "He
started to play better and better."
Blake said he wants to continue that improvement next week at
the U.S. Open.
"This is a great exclamation point," he said. "But in my
mind, I've been back."