BEIJING -- Maria Sharapova quit because of a chest injury while trailing in the China Open semifinals Saturday, sending Russia's Maria Kirilenko into the title match against Germany's Anna-Lena Groenefeld. 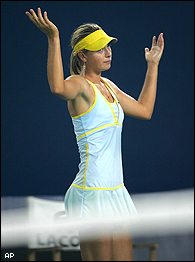 Kirilenko, ranked 45th, was ahead 6-4, 2-1 and "very surprised" when Sharapova stopped. The decision by the top-ranked Russian prompted boos from the crowd at a tournament beset by injuries.

Sharapova said a muscle on the right side of her chest is inflamed, causing recurring pain. The problem began in Zurich, Switzerland, last October, and she said a switch to heavier balls in that tournament may have been a factor.

The pain "comes on unexpectedly from day to day," she said. "It's very mysterious."

Sharapova said her father, also her coach, decided to end the match Saturday.

"I'm very disappointed, obviously," she said. "With every shot, with every forehand and serve I hit, it got worse and worse."

Groenefeld defeated Poland's Marta Domachowska 7-5, 6-3 in the other semifinal. The big-serving Groenefeld, ranked 30th, won the double's championship in Bali last week. Groenefeld and Kirilenko and will be going for a first WTA singles title.

Davenport withdrew before the tournament because of a lower back strain. Williams pulled out before her quarterfinal because of a leg injury. Defending champion Serena Williams lost in the second round to China's Sun Tiantian and attributed her poor play to an ailing leg.