TOKYO -- Martina Hingis couldn't be happier with the way her
comeback is progressing. 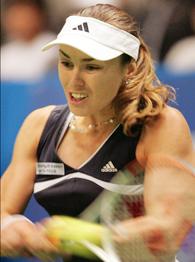 She defeated top-seeded Maria Sharapova 6-3, 6-1 Saturday to
advance to the final of the Pan Pacific Open.

Hingis, who entered the tournament as a wild card, relied on
solid groundstrokes and a strong serve on her way to a win over the
defending champion that took just 1 hour and 6 minutes.

"It took me three years to recharge my brain and my body and
hopefully I can keep playing like this," said Hingis, who will
face second-seeded Elena Dementieva of Russia in Sunday's final.

Hingis, who retired three years ago because of foot, heel and
ankle injuries, is a four-time winner in Tokyo. She last played in
the tournament in 2002.

She won the mixed doubles Grand Slam title at the Australian
Open last Sunday after reaching the singles quarterfinals.

The former World No. 1 turned in a dominant performance against
the 18-year-old Sharapova, who is currently fourth in the world
rankings.

"I played well," said Hingis. "I didn't miss much on key
points and I put a lot of pressure on her. I couldn't ask for much
more, she's the No. 4 player in the world."

With a 4-3 lead in the first set, Hingis broke Sharapova to go
up 5-3 when her return hit the net and fell in on Sharapova's side.
She then had two aces in the final game to take the opening set.

Hingis, who was playing Sharapova for the first time, said
Saturday's win was the result of confidence in her game.

"Playing the top players you have to play them over and over,"
said Hingis. "You have to start believing and step by step I'm
getting my confidence back."

With the capacity crowd behind her, Hingis took a 5-1 lead in
the second set and broke her opponent in the final game when
Sharapova's return went out.

Sharapova played well in the first set but lost her focus in the
second set.

"She was picking the ball up early," said Sharapova. "She
used my pace and the quickness of the court to her advantage and
came up with some very good shots."

Sharapova won the first game of the second set and then lost the
next six.

"In the second set I could have fought a little harder," said
Sharapova. "I didn't have the fighting sprit that I usually
have."

Dementieva is 2-2 against Hingis in previous matches and said
she is looking forward to facing the Swiss player in the final.

"Martina is a good player and it's exciting to see her back,"
said Dementieva. "But that doesn't mean I won't be playing and
I'll do everything possible to beat her."