ATP Chairman Etienne de Villiers in a conference call on Monday nicely framed the logical argument for instant replay in tennis this way:

"To me, it was always crazy that with modern GPS technology we could tell where a person is to within a yard or meter on the planet earth," de Villiers said, "and yet we can't tell whether a tennis ball is in or out."

Now, on a limited basis, that will change in professional tennis.

Conceding that human eyes alone aren't always adequate to make that definitive decision, the ATP, WTA Tour and United States Tennis Association announced that an instant replay system will be introduced at selected tournaments this year in North America.

The NASDAQ-100 Open, which begins on March 20, will be the first event to implement the new Hawk-Eye Officiating system. The U.S. Open is the only other event officially committed to the eight-camera system, which will feature in-stadium video boards. Tournament directors from around the world will be in attendance in Miami and observe the system. Tennis officials hope it will be employed in some of the U.S. Open Series events this summer. 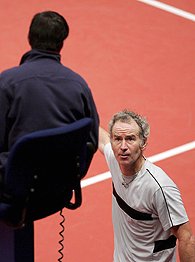 "We all, as followers of the sport, have all seen matches turn on questionable calls that through television replay in the past have been shown that the call may have been incorrect," said Larry Scott, the WTA Chairman and CEO. "With all that's on the line in tennis these days, we felt we had to pursue every means possible to utilize technology to make sure that calls were accurate without losing the human element of officials on the court.

"While tennis is at a very high level of officiating, there's no denying that through this technology players and fans can know that the right call was given."

Tennis has wrestled with the technology of instant replay in recent years, but after bad calls played a pivotal role in several marquee matches -- for example, the 2004 Australian Open final contested by Kim Clijsters and Justine Henin-Hardenne and the 2004 U.S. Open quarterfinal match between Serena Williams and Jennifer Capriati -- the sense of urgency increased.

In that memorable U.S. Open match, Williams hit a shot at a critical juncture of the third set that was called in by the linesman but overruled by the umpire, sitting across the court from where the shot landed. Television replays showed the ball was in by nearly a foot. Williams lost the match.

"With regard to the Serena call at the U.S. Open, we certainly feel that might have put us on a faster track," said Arlen Kantarian, the USTA's chief executive of professional tennis. "We pulled together after that call and said, 'How can we avoid this from ever happening again?' "

Here's how the new system will work:

Longtime player Todd Martin believes the system, upon further review, will demonstrate how good umpires and linemen really are.

"The introduction of electronic line calling will be good for the U.S. Open," Martin wrote in an e-mail Monday. "It is good to see that the USTA will have strict parameters on the use of challenges. Any more than the two incorrect challenges per set would be detrimental to the game. I believe we will see a better TV product and a competition less [affected] by officiating."

"The idea that the doubt is left in a player's mind as to whether there was a right call or not is troubling in a time when you know that technology is available to tell you absolutely whether the ball was in or out," Kantarian said.

The system was tested last September at the Hopman Cup in Perth, Australia and tennis officials claim the Hawk-Eye system was 100 percent accurate, allowing for a margin of error of three millimeters. Interestingly, though, according to the ATP's Gayle Bradshaw, 45 percent of the players' challenges (37 of 83) were upheld.

"The very first challenge made in Perth was a chair umpire's overrule," said Bradshaw, the Tour's administrator of rules and competition. "His overrule was overturned. The umpires are going to have to adjust a little bit, and their adjustment is going to be, `Forget about it. Umpire as you would normally.' "

The players seem to be behind replay.

"In my 20 years in professional tennis," said Andre Agassi, "this is one of the most exciting things to happen for players, fans and television viewers."

Said Maria Sharapova: "As a player, I want to know that the line calls are as accurate as technology will allow. In that sense, today's announcement is great news for all players."

"If anyone's been listening to my commentary the past year, then they know I'm in favor of using replay," said analyst John McEnroe, who won an ATP doubles title earlier this year with Jonas Bjorkman in San Jose. "I think it will make tennis more interesting."

But what if a player with McEnroe's historic guile decides to abuse the system? What if a player, sensing a match slipping away, tries to change to momentum by issuing back-to-back challenges -- even if the calls were obviously good?

"I know players had a concern that, without a limit, there could be the possibly of gamesmanship, which would slow down the pace of the match," Scott allowed. "Players felt [two challenges per set] was a more prudent way to introduce it to limit that possibility."

According to Bradshaw, the entire challenge process will require no more than 10 seconds, from beginning to end.

"In Perth, we were averaging around five seconds from challenge to display," he said. "In conversations I had with Taylor Dent, he noticed that this technology actually speeded up play rather than slowed it down. There was less reason or no reason to argue with the chair umpire. The players, once they saw the call, just went back and played."

In light of the NFL's replay delays that can stretch as long as several minutes, this would represent a dramatic change. But unlike the NFL, where replay officials automatically review questionable calls in the final two minutes of each half, if a player has exhausted their challenges, chair umpires would not be obligated to prompt replays -- even if a questionable call is made toward the end of a tight match.

ESPN introduced automatic line-calling technology to American television at the Tennis Masters Miami in March 2002, and to the Grand Slams in 2003 where it was used at the Australian Open, French Open and Wimbledon. The "ESPN Shot Spot" system uses multiple live cameras at various points around the court to triangulate the path and landing point of the ball, which can then be automatically displayed using digital animation.

Cost might be a factor for smaller tournaments; the system will cost around $100,000 to implement at the NASDAQ-100 and, according to Kantarian, it will cost "a lot" to provide replays for two weeks on the two show courts, Arthur Ashe and Louis Armstrong Stadiums.

"This is a major technological integration into our sport. I don't think we know, sitting here today, where we'll necessarily wind up, but we felt this was the most prudent course."