KEY BISCAYNE, Fla. -- Sometimes this is the way it goes. You accept a trophy for being voted 2005 Newcomer of the Year on the women's tour, and three days later you're beaten by No. 1,144 in the world, a 16-year-old fledgling pro whose photo doesn't even appear on the WTA Web site.

Anna Tatishvili, a bubbly kid from the Republic of Georgia who trains at the nearby Evert Tennis Academy in Boca Raton, upset India's Sania Mirza 7-6, 1-6, 7-6 in a first-round match at the Nasdaq-100 Open that ended just before midnight Thursday.

As a reward for that giant upset, Tatishvili draws No. 8 Elena Dementieva in the second round. 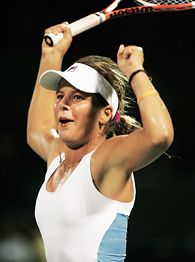 "She's so grounded and so humble and so hungry that I think she's going to be OK mentally and emotionally," John Evert, her coach, said on his way to a light practice session with his surprising pupil. "My biggest concern is that she recover physically. She did a lot of running -- almost three hours of corner-to-corner. We'll concentrate on her not getting too far ahead of herself."

Tatishvili survived a slump in the third set after taking a 4-0 lead. She hung in against Mirza's slashing ground strokes, answering with some monster shots of her own, including a few backhand ropes down the line and one spectacular angled forehand cross-court shot that earned her a crucial point in the third set tiebreak.

"It's a bit tough when you're not playing the best tennis and the other girl is just, you know, playing some unbelievable shots," she said.

Tatishvili called for the new instant replay system six times with the aplomb of a teenager trying out a video game, and was unabashed by the fact that she lost all of her challenges.

She was cheered on by about 40 of her fellow academy classmates who were allowed to stay up way past their bedtimes and "are walking around like zombies today," said Evert's assistant, Loretto Vella.

After the match, a smiling Tatishvili fingered an orange rubber bracelet stamped with the word "Desire" and told a handful of reporters she'd been playing tennis since the age of "4 and 8 months," precisely. She moved to Florida with her family three years ago.

Chris Evert, who is on a ski vacation in Colorado, advised her young protégé on the phone before the match.

"She told me to just -- 'cause I was nervous, I never played in such a big court and a lot of people -- just, 'Forget about it,' and just, 'You, ball and opponent,'" Tatishvili chirped.

Tatishvili, the 19th-ranked junior in the world, will continue to play junior tournaments and lower-level pro events and accept occasional wild cards to major events, John Evert said. but the upset of Mirza "is a sign of her being able to raise her level when the chips are down," he said.

"She is -- and I want to say this in a very positive and complimentary way -- very naïve, a little girl in a lot of ways. That's helped her be tunnel-visioned in terms of her work ethic."

"I mean, the second year on the tour is obviously much harder than the first," said Mirza, who burst into tennis consciousness last year, bringing shots loaded with pace, a smart, slightly cheeky personal style and the intriguing story of a Muslim athlete working to balance her lifestyle with her faith.

"Everyone knows how you play and everyone knows your weaknesses and your strong points," she said. "They all come in with a game plan."

Mirza played with an elaborate brace covering most of her right arm to ease the strain on a sore elbow and wrist. "I need a new arm," she said ruefully in parting.

Freelance writer Bonnie DeSimone is a frequent contributor to ESPN.com.