ROME -- Martina Hingis saw a different side of life in her three years away from tennis. Some things, however, don't change: She can still win tennis tournaments. 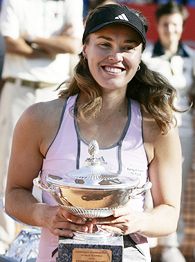 Hingis beat 16th-seeded Dinara Safina 6-2, 7-5 on Sunday in the Italian Open final for her 41st career title, but her first since winning in Tokyo more than four years ago.

She returned in January after nearly three years away from the pro tour with foot and ankle injuries.

"I lived a different life and experienced a lot of things, and that probably helps me today in those moments," Hingis said.

"If I could turn back time, of course I would have continued to play. But at that point it wasn't possible -- the pain and the operations. Right now, I'm very happy that my health is as good as it is."

After winning the first set in 27 minutes and taking a 4-1 lead in the second, Hingis faced three break points that would have sent the second set to a tiebreaker. But she gathered herself and served out the match.

When Safina's backhand return sailed long, the Swiss player placed her hand on her chest and took a deep breath of relief.

"I know how life is after tennis, and that probably gives me a lot of joy at these moments. I want to save them as much as I can," Hingis said.

"I know how life is after tennis, and that probably gives me a lot of joy at these moments. I want to save them as much as I can."
Martina Hingis,
on winning first tournament since un-retiring

Hingis, 25, said the victory boosted her confidence entering the French Open, which starts next Sunday. The Italian Open is a key clay-court warmup for Roland Garros, the only Grand Slam that Hingis hasn't won.

"It's a great victory, but it doesn't end," Hingis said. "This is just the beginning of tough tournaments coming up -- the French Open and Wimbledon."

In the meantime, Hingis plans to reward herself by reverting to her retirement lifestyle for a day or two.

She said she would probably have a glass of wine and not set her alarm clock for Monday morning.

"You know, I haven't been used to doing this for three years," she said. "Now you really have to have this solid life. That's probably my biggest joy for the next couple of days."

Hingis is projected to rise to No. 14 in the rankings Monday. She came back to beat Venus Williams in three sets in Saturday's semifinals.

It was Hingis' second Italian Open title. She beat Williams in the 1998 final.

Safina appeared tired from her 2-hour, 33-minute win over Svetlana Kuznetsova in the semifinals and, Hingis was in top form from the start.

The former top-ranked player broke Safina's serve in the opening game by hitting a sharply angled shot to Safina's backhand that the Russian -- stretched far off the court -- hit into the net post.

Hingis went on to take a 5-0 lead in the first set and made only four unforced errors. She won a series of points by picking on Safina's weaker backhand.

To the crowd's delight, Safina managed to win two games, but Hingis promptly closed out the set when Safina missed another backhand.

"You don't get any free points from her," said Safina, the younger sister of two-time Grand Slam winner Marat Safin.

Hingis also took a big lead in the second set, but Safina came back with a break in the sixth game and saved two match points with Hingis up 5-3. Safina hit an ace on the first match point and a service winner on the second.

Safina broke again to even the set at 5-5, but Hingis then came up with another break and served out the match on her second try after falling behind 0-40.

"I felt like I never really had the game out of my hands," Hingis said. "I almost feel like I won my first title. This is what you play for, what I came back for."