LONDON -- Adidas won a temporary court ruling Wednesday in a dispute with international tennis bodies over the size of its three-striped logo on players' clothing, allowing the logo to appear at Wimbledon. 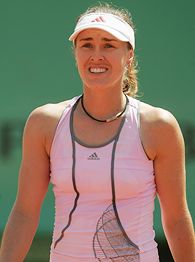 The German sportswear manufacturer was granted a temporary
injunction in London's High Court against a new rule limiting the
size of the logo to 4 square inches.

Adidas sponsors Andre Agassi, Martina Hingis and Justine Henin-Hardenne, among others top players. The restrictions had been scheduled to go into effect at Wimbledon on June 26.

Adidas said it had not been given enough time to adapt its manufacturing process in time for Wimbledon. A spokeswoman for
adidas in Herzogenaurach, Germany, had no immediate comment.

Morritt ordered the case to go to trial in early October.
Morritt rejected a bid by the tennis bodies to have adidas' case
dismissed.

"We acknowledge the court's decision and appreciate its
willingness to schedule an early trial on the merits to compensate
for maintaining the status quo," the ITF Grand Slam Committee
said.

Adidas contended the three stripes running down shirt sleeves or shorts are not a standard logo. It said the official logo is the "performance logo" depicting three stripes arranged in a pyramid
with Adidas written underneath.