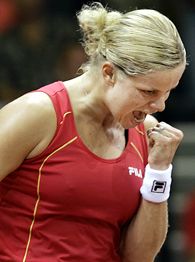 Clijsters' victory over the 17-year-old American gave the Belgians an insurmountable 3-0 lead. Belgium will face Italy, which defeated host Spain, in the Sept. 16-17 final.

Having beaten Jamea Jackson to give the Belgians a 2-0 lead on Saturday, Clijsters wasted no time in securing a place in the final and wrapped up the first set against King in 25 minutes. The only game King won came at the start of the second set.

"We had an ideal start on Saturday and now I was able to finish it off," Clijsters said. "And I played a lot better."

It was the first time in five Fed Cup meetings that Belgium beat the U.S. team.

King was added to the starting lineup early Sunday to replace Jill Craybas. The veteran felt ill after her loss Saturday to Kirsten Flipkens. The U.S. team played without injured Lindsay Davenport and Serena Williams. Venus Williams had also withdrawn from the event.

Belgium played without Justine Henin-Hardenne. The French Open champion dropped out after losing to Amelie Mauresmo in the Wimbledon final.

In the later inconsequential matches, Mashona Washington replaced an ill Jackson but retired with a strained right knee while leading Flipkens 6-2, 1-3.

Craybas and King won the doubles against Leslie Butkiewicz and Caroline Maes 6-1, 6-2.