How many of today's WTA players will hang in there for 18 years? The odds are increasingly against it, even if the calendar is shortened.

That sheer durability is part of what made Conchita Martinez's career distinctive. Her timeline spans two or three eras in women's tennis. She played then-33-year-old Chris Evert as a 16-year-old in 1988, then at the age of 33 she faced then-16-year-old Nicole Vaidisova last year. Martinez's year-end ranking was inside the top 40 in all but one of her 18 seasons on the women's tour, and she maintained a year-end top 10 ranking from 1991-96. 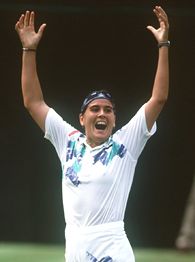 Martinez had a winning record against Martina Navratilova (4-1), most famously, of course, defeating her in the 1994 Wimbledon final to carve up the stereotype that Spanish players couldn't win on grass. Other leading players of the era handled Martinez better. She was 1-20 against Monica Seles, 1-13 against Steffi Graf and 4-14 against her great Spanish rival Arantxa Sanchez Vicario, and never defeated either of the Williams sisters in eight tries.

Organizers of the Acura Classic outside San Diego honored Martinez, who lives part-time in nearby Cardiff, in a tribute Tuesday night with speeches and gifts including a motor-scooter presented to her on stadium court. She thanked tournament officials for giving her "the opportunity to say goodbye to my American fans and my fans right here near my home  I'm really going to miss the friends I have made all over the world.''

Yet Martinez persevered through 2005 to win her first tournament in five years and finished the season at No. 32 -- still the highest-ranked singles player in her country. She ended the season ranked ninth in doubles and might come back to play the tandem game, following the lead of the ageless Navratilova and that of Rennae Stubbs, 35, of Australia, one of the few players still around who turned pro before Martinez did.

The Williamses and No. 10 Lindsay Davenport sent their regrets to the Acura, but a few other big-name players have chosen this tournament as a re-entry point after layoffs of various lengths. No. 4 Maria Sharapova and No. 13 Martina Hingis will be back after brief post-Wimbledon interludes; No. 5 Nadia Petrova will reappear for the first time since the French Open; and No. 9 Mary Pierce will end an injury-prompted hiatus that began nearly six months ago.

On the other end of the experience spectrum, 14-year-old Coco Vandeweghe of Rancho Santa Fe, Calif., was given a wild-card invitation to the Acura. Vandeweghe, who ended last season ranked 13th in the U.S. girls' under-14s and has a precociously fearsome serve, is the granddaughter and niece of former NBA stars Ernie Vandeweghe and Kiki Vandeweghe, respectively. Not surprisingly, she's already 6 feet tall.

Sibling act: Vania King, still sitting at a career-high No. 78, lost in the first round Monday in San Diego after qualifying for her first WTA event since announcing she would turn pro, eschewing college. In her pro debut, the 17-year-old King lost to No. 2 Kim Clijsters in Fed Cup play three weeks ago. King's brother Phillip, meanwhile, fought his way into his first ATP main draw since 2000 by qualifying for the Legg Mason tournament in Washington, D.C., and won his first tour match against six previous losses Monday, outlasting Bobby Reynolds in three sets. Phillip King, the nation's top-ranked junior in 1999 and 2000, graduated from Duke University in 2004. He is ranked No. 387 on the men's tour. 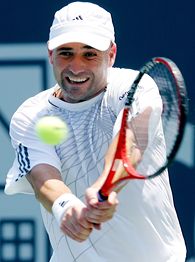 Business as usual: Wondering what U.S. Open organizers are planning in the way of special recognition for soon-to-bow-out Andre Agassi? The answer is nothing, and that's at the express desire of Agassi and his camp, who want him to concentrate on tennis and not pomp and ceremony in his 21st and final trip to Flushing Meadows as a competitor. It's likely he'll be honored next year with a tribute similar to the one afforded Pete Sampras on opening night in 2003. As for when Agassi will first take the court, if recent history is any guide, it'll be the night session on Monday, Aug. 28. Agassi has played in that slot in seven of the past eight years. He's 77-18 lifetime at the Open, 26-3 in night matches.

Hawk-Eye watch: The men win this round. They made 66 challenges and won 33 last week at the Countryside Classic at UCLA using the electronic line-calling technology installed on stadium courts at all U.S. Open Series events. The women succeeded in just seven of their 45 challenges at the Bank of the West Classic in Stanford, Calif.

Bonnie DeSimone is a freelance writer and a regular contributor to ESPN.com.