10 Ranked in the top 10 in three different decades
Andre Agassi is the only player to accomplish this feat. In 1988, he cracked the top 10 for the first time, going 63-11 with six titles in seven finals appearances.

That was just the beginning. Since the inception of the rankings system in 1973, Agassi is the only player to finish an entire season in the top 10 in three different decades. In fact, from 1988-2005 the only years Agassi did not finish in the top 10 were 1993 and 1997. He finished 16 seasons ranked in the top 10, tied with Jimmy Connors for the most by any player.

The Masters Series tournaments don't have the same luster as Grand Slam events. Still, with nine events on the schedule each year, they have just as much of an impact on the year-end rankings, and Agassi is the most accomplished Masters Series player since the tour went to its current format in 1990. He has 17 Masters Series titles, the most on the ATP Tour. (Pete Sampras and Roger Federer are tied for second with 11.) Of the nine different Masters Series events, Agassi won seven of them, more than anyone else. The only two he failed to win were in Monte Carlo and Hamburg, both of which are clay-court events. His first Masters Series title came in 1990 in Miami. Unless he wins the U.S. Open, Agassi's last win on tour will have been a Masters Series event, Cincinnati, back in 2004.

8 Number of career Grand Slams titles
Only five players have won more Grand Slam titles than Agassi's eight. His first came in 1992 at Wimbledon, where he was out to prove that image was not everything. One of the most gifted players at that time, it was unknown if Agassi could knock off the higher-seeded and harder-serving opponent Goran Ivanisevic. After the Croat dumped a volley into the net on match point in the fifth set, Agassi raised his arms in jubilation and put to rest those who never thought he would be able rise to the occasion. In a 10-year span from 1994-2003, Agassi would add seven more Grand Slam titles to his résumé. Agassi won each Grand Slam title at least once: Four times at Australia; twice at the U.S. Open; and one each at the French Open and Wimbledon. Agassi's most memorable Slam came in 1999 at Roland Garros. Down two sets to love against Andrei Medvedev, Agassi came back to win the match and championship, achieving the career Grand Slam.

7 Ranking all time in career titles

At the Masters Series in Cincinnati two years ago, Agassi won the 60th tournament of his career -- 17 years after he won his first title in Itaparica, Brazil. His 60 titles ranks him seventh all time on the ATP Tour. He's won tournaments on five different continents in 12 different countries throughout his career. But it was in the United States where he made his biggest mark: 41 of his 60 titles came in the states. Jimmy Connors holds the all-time record with 109 titles.

6 Number of titles at the Masters Series in Miami
Key Biscayne, Fla., is one of the most popular vacation sites in the United States. Beaches, hotels and five-star resorts make this venue a can't miss for anyone who needs to get away. Without question, Agassi couldn't wait to get to south Florida every year.

Agassi won this tournament six times, more than any other tournament in his career. His first title came in 1990, which included hard-fought wins over Jim Courier and Stefan Edberg. Agassi won back-to-back titles in 1995-96, then won three straight from 2001-03. When all was said and done, Agassi's six career titles in Miami were not only a record on the ATP tour, but one more than his wife Steffi Graf achieved during her career.

5 Number of players to win the career Grand Slam
After more than a decade on tour, Agassi had seen some highs and lows in his career. However, at the 1999 French Open, he was at his very best. Having rededicated himself to the game, Agassi came back from two sets down to defeat Andrei Medvedev in the final, and, in the process became the fifth (and last) player to win each Grand Slam at least once. For years, Agassi played second fiddle to Pete Sampras as the most accomplished player of his era. Agassi's French Open victory doesn't mean he will go down as the more accomplished player; but it begs the question: Which is the more spectacular feat, Sampras' record of 14 Grand Slam titles or Agassi's career Grand Slam? Agassi's name will be forever linked with the four other greats who won each major: Rod Laver, Bill Tilden, Roy Emerson and Fred Perry.

4 One of four players to win the Australian Open four times
Two things changed as the 1995 season approached: Andre Agassi decided to shave his head, and he finally entered the Australian Open. Not once in his first nine years on tour did Agassi play in the year's first Grand Slam. He had virtually no trouble getting to the final where he faced Sampras. With his baseline-attacking game working at full force, Agassi knocked off Sampras (the only time he beat Pete in a major final). From 2000-2003, Agassi failed to lose a single match at Melbourne Park. (He did not play in 2002 because of a wrist injury). In his final championship run in 2003, Agassi lost a total of 48 games. Since the field expanded in 1974, no player had such a dominating effort en route to the title. Agassi joined Emerson (six), Jack Crawford (four) and Ken Rosewall (four) as the only players to win the Australian Open at least four times. 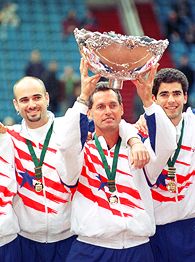 In the mid-90's, no U.S. player was more recognizable in Davis Cup play. Only one American player, John McEnroe (41) has more Davis Cup singles wins than Agassi's 30.

In 1990, he won an important opening-round match vs. Richard Fromberg in the Davis Cup final and the U.S. eventually beat Australia 3-2. In 1992, Agassi had a remarkable Davis Cup season, winning all seven of his matches. The U.S. defeated Sweden in the semifinals and Switzerland in the final. And in 1995, Agassi was part of a star-studded lineup that consisted of Sampras and Todd Martin. Agassi won impressively over Mats Wilander in the semifinals, but did not participate in the final against Russia after suffering a chest injury. From 1991 to 1997, Agassi did not lose one match in Davis Cup play, winning 15 consecutive matches over that time.

2 One of two players to win the Golden Slam: All four Grand Slams and the Olympic Gold medal
In 1996, Agassi won Olympic Gold in Atlanta, easily beating Sergei Bruguera in the final, losing just six games in three sets. When he won the French Open three years later, Agassi accomplished the "Golden Slam" -- an unofficial term to describe those who have won each Grand Slam and an Olympic gold medal. Agassi became the first American male to win Olympic gold since 1924. The only other player to accomplish this feat is Steffi Graf, who won a "true" Golden Slam in 1988 -- all four major championships and Olympic gold in one season.

1 Only player in the Open era to win a title in 18 different years
Agassi's first title came in Itaparica, Brazil in 1987. In 1988 he won six more titles and surpassed $2 million in prize money. The 1990's brought out the good, bad and ugly in Agassi. In 1990 and '91 he reached three Grand Slam finals, losing each: twice at the French Open and once at the U.S. Open. In 1992, Agassi captured his first career Grand Slam title at Wimbledon, a thrilling five-set win over Goran Ivanisevic. Ugly came during an injury-plagued 1997 season, playing just 24 matches that year. That was, without question, the low point of his career. For the first time since 1987, he failed to win a title and his ranking plummeted to a career-worst 141. Perhaps reality hit hard after his fall from grace. In 1998, he bounced back and finished the season ranked No. 6, and in 1999 he won the French Open title, the only major that had eluded him. He finished the year ranked No. 1 in the world for the first and only time in his career. Agassi continued his strong play into the next decade. In 2000, 2001 and 2003 he won the Australian Open. He also had legitimate chances to take home another title at Wimbledon, twice losing in the semis to Patrick Rafter.

What made Agassi so captivating was his transformation from an image-is-everything guy into a legitimate workhorse. He often said it was the process of winning that kept him going. He won titles in an unprecedented 18 different years throughout his career with a hard-core workout regiment, on and off the court. He had an uncanny ability to outlast and wear down his opponents.

Without question, no player ever went through the trials and tribulations quite like Andre Agassi.

Matt Wilansky is a frequent contributor to ESPN.com's tennis coverage.